Warning: mysqli_free_result() expects parameter 1 to be mysqli_result, bool given in /var/www/html/americanthinker/admin/common/functions/func.general.php on line 126
 White like Me: Thoughts on Young Obama's Prom Photos - American Thinker
« Spinning Carbon Scare Stories out of Nature's Tornados | Is DoJ lying about notifying Fox News of Rosen subpoena? »
|

White like Me: Thoughts on Young Obama's Prom Photos

TIME has just published pictures from Barack Obama's prom night in 1979. For me, these photos are more evidence of something I have thought for a long time -- young Obama seemed like a white guy.

Despite the Obama mythology, these new photos show that the young Obama was dating a white girl named Megan Hughes and hanging out with other white people including his basketball teammate Greg Orme and fellow student Kellie Allman. It was Kelli Allman (née McCormack) who provided these new photos to Time. She is pictured second from the left. 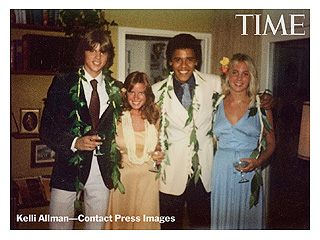 One of the most puzzling things to me about contemporary politics is the way so many people seem to think that Barack Obama is a black man. As one of the folks who got to know him while he was at Occidental College, I can report that I thought of Obama as an average white guy in terms of his IQ and his cultural inheritance. This, of course, should not be so surprising since Obama was raised by his white mother and his white grandparents nearly his entire life.

The young Obama that I knew was mainly interested in hanging out with white guys and white girls (like me and my radical girlfriend) or with his radical Muslim friends. I interacted with young Obama on various occasions between 1980-1981 and I can report that I never saw him hanging out with black students. Never.

Obama, of course, has done a lot of work to create a politically and socially advantageous black image for himself. I have already called attention to how Obama converted my white college era girlfriend into a big black woman in his autobiography, Dreams from My Father.

This ruse needs to end. The young Obama I knew was nothing like the young black people I knew at Occidental College. He did not come from an underprivileged background. He did not have any of the hostility to white people that I sometimes saw among blacks at Occidental College. All the reports we have so far indicate that young Obama was dating white women, hanging out with his white roommate -- Phil Boerner -- at Columbia, and generally living a white lifestyle.

I remain amazed that a guy as white as me managed to game the affirmative action system all the way to the White House. I expect future generations, however, will see through this ruse and render judgments that reflect the actual evidence of Obama's life including these new prom photos.