"Benghazi-gate," "IRS-gate," "AP-gate" -- it would seem the intrepid investigators in the dinosaur media, in an effort to repair their shredded reputations, are finally catching up to the truths known months or years ago to those of us who get our news from the internet.

IRS targeting "patriots"?  Not a problem for the dinosaurs; those racist lovers of the Constitution deserved it.  Hillary, Susan, and crew covering up the Benghazi terrorist attack with a bald-faced lie about a video trailer?  The dinosaurs had no problem swallowing this lie until the whistleblowers made it apparent what fools they were for doing so.  Then they had to quickly regroup.  But the Obama administration sucking their vitals from the Obama-friendly Associated Press?  Well, that hurts them directly.  They're under attack!  Unforgivable!

Hey, dinosaurs, now that we have your attention, we have a hot tip for you: there's one big Obama lie that's two years old that you completely missed.  In fact, you suppressed the truth.  And you don't have to dig very hard to find this lie; it can still be downloaded at any time from whitehouse.gov for your own inspection and analysis.  It's the Obama long-form "birth certificate" forgery.

That this digital document is a forgery has been proved beyond question.  Various experts have proved its fakery on different levels:

So the conclusions of the experts are definitive: it's a forgery.  If you have not yet recognized this truth, then you are waiting for acceptance -- for a lot of people to agree with you -- so you won't be attacked as a raving lunatic should you dare to bring up the subject.

Now, the arguments for forgery at the Photoshop level can be a bit hard to follow if you're not computer-adept.  Your 12-year-old nephew will understand them completely, but Granny -- or dinosaur journalists who are around Dan Rather's age -- may not.

The arguments for letters lining up vertically, or for differing typefaces, may require you to have spatial perception.  Not everybody does; for dinosaur journalists, high-school geometry might not have been a particularly strong subject.

But almost everybody can understand what you see below, in Figure ULC, the upper-left corner of the PDF-image forgery: 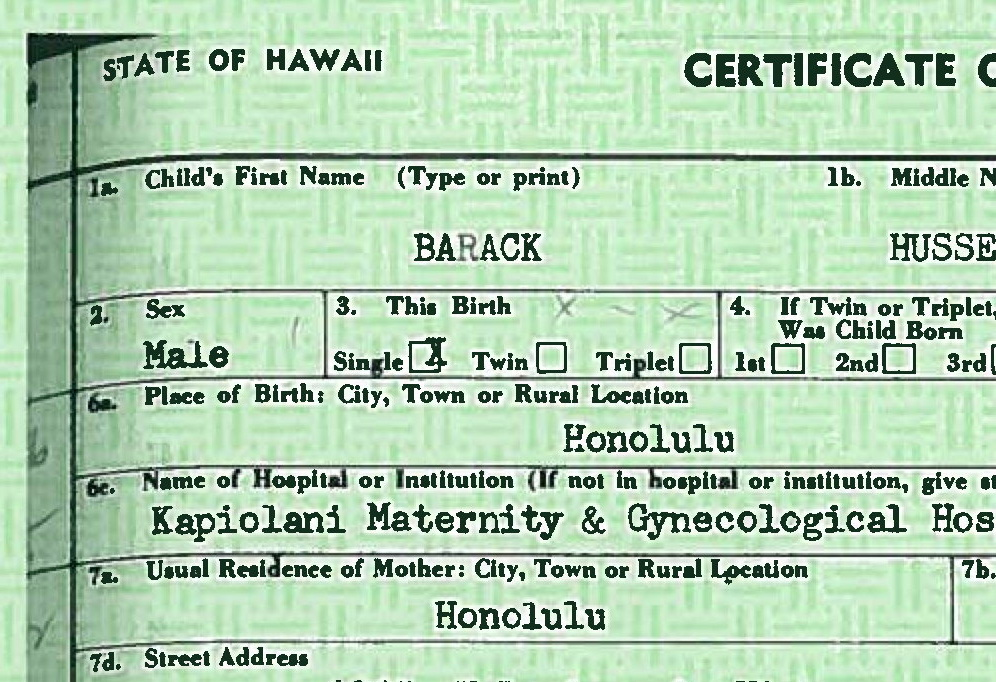 The public was essentially told that Hawaii Department of Health officials took a bound volume of original paper 1961 birth certificates, turned to Obama's, placed it on the copier, copied it onto green security paper, stamped and embossed-sealed it, then delivered it to Obama's lawyer to be flown back to Washington.  In which case, the "birth certificate" must be fake -- because near the left margin, especially at the top of the document, the text and lines of the form bend downward (to simulate the bending of the page near the binding).  There isn't a copier in the world that will bend an image like that, even when the paper curls away from the glass.  (If it did, the manufacturer would quickly go out of business.)

And the Obama re-election campaign had the brass to put this image on T-shirts and mugs it was peddling, preserving for all time this momentous fraud.  In your face, you dumbass dinosaur journalists!  You didn't even notice!  How do you like them apples?

OK, which one of you will be the first to break the ice and tell the truth?  I double-dare ya!

About the author: Nick Chase is a retired but still very active technical writer, technical editor, computer programmer, and stock market newsletter writer.  During his career he has produced documentation on computers, typewriters, typesetters, headline-makers, and other pieces of equipment most people never heard of, and he has programmed typesetting equipment.  You can read more of his work on the American Thinker website and at contrariansview.org.