Warning: mysqli_free_result() expects parameter 1 to be mysqli_result, bool given in /var/www/html/americanthinker/admin/common/functions/func.general.php on line 126
 'Any race except Caucasian' - American Thinker
« Maybe they should sell it in the candy aisle | A bitterly divided Venezuela is Chavez' legacy »
|

'Any race except Caucasian'

Oops! A casting call for a new host of a children's program on the Canadian Broadcasting Corporation, the taxpayer supported, government-owned television and radio network of Canada,  accidentally told the truth, when it specified "any race except Caucasian." See for yourself: 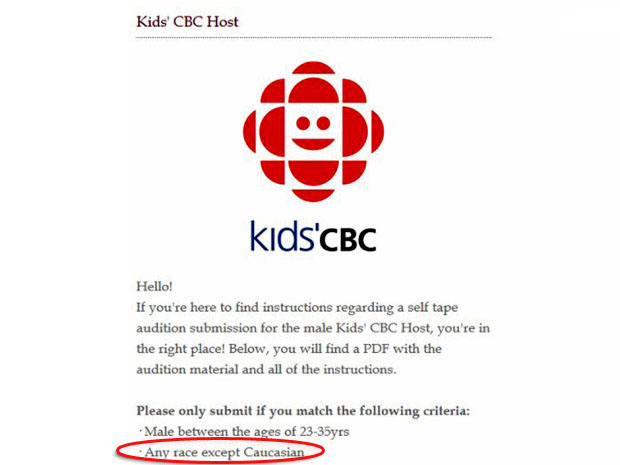 A casting call to hire a new CBC host that specifically said white people need not apply has been withdrawn, with the casting agent offering apologies for the mistake.

The original ad for the host of a children's show, posted on the casting agency's website under a CBC logo and on Craigslist, said: "Please only submit [an audition tape] if you match the following criteria: Male between the ages of 23-35 years; Any race except Caucasian."

A new version of the ad removes the race reference, but maintains the sex and age restrictions and that applicants "must be able to carry a tune," "ability to dance or move well is a bonus," and should be "not afraid to show a silly side," among others.

The excuses being made are all of the familiar variety: inclusion, not exclusion. The head of the casting agency which got the contract said:

"We were asked to seek a cast of diversity. We mistakenly took that to mean that the production was not seeking Caucasian actors. This was a mistake that was made entirely by the casting company.

"Of course, it's open to all ethnicities," she said.

Of course it is. They will consider any application from a Caucasian in light of the need for diversity (which means a non-Caucasian, except possibly a homosexual Caucasian might be OK).