Warning: mysqli_free_result() expects parameter 1 to be mysqli_result, bool given in /var/www/html/americanthinker/admin/common/functions/func.general.php on line 126
 The McConnell Test of Progressive Media Power - American Thinker
« News that must be suppressed | The Dhimmitude of American Jewry »
|

The progressives who run the Democratic Party and the mainstream media are flexing their muscles, attempting to frame the story of a possible political crime through the wrong end of a telescope, in the belief that the MSM's sheer mindshare can win out over the facts.

A private conversation between Senator Mitch McConnell and his aides was recorded, and excerpts have appeared on the progressive Mother Jones website, in an article authored by David Corn. Unless one of McConnell's closest aides turned rogue, the bugging was a crime. In fact, it was the very same crime that triggered Watergate, the liberals' favorite example of an important political crime.

In the media narrative flooding the airwaves and newsprint, the outrage is that McConnell's campaign contemplated using the self-disclosed mental problems of a potential opponent, the actress Ashley Judd, as a campaign issue. There is no concern at all that a private conversation has been recorded, possibly a serious crime of the sort that brought down Tricky Dick and motivated most of today's media stars to enter journalism.

Jonathan Tobin of Commentary believes that this power move won't succeed. In "The Media Can't Bury McConnellgate" he writes:

According to [the MSM] view of the incident, we are supposed to be shocked and outraged that a senior legislator would sit and listen as his aides happily contemplated doing opposition research against a rival. To say that McConnell's people were confident they could take down Judd is an understatement. The phrase that one person in the conversation uses to describe how easy it would be to find foolish statements by Judd-"a haystack of needles"-will, no doubt, enter the country's political lexicon regardless of the source of the tape. However, liberals seem to be saying that the only decent thing for McConnell to do was to leave the room or perhaps even fire those chuckling about Judd's personal foibles.

This is, of course, hypocrisy on an Olympian scale. After a year in which Barack Obama's campaign spent much of its time trying to falsely portray Mitt Romney as a heartless murderer and tax cheat, Democrats are in no position to cry foul about Republicans discussing the possibility of working over Judd.

But the real question here is not liberal hypocrisy about McConnell. The issue is the practice of taping private political conferences between a candidate and his staff.  (snip)

...if McConnell's enemies can get away with it, no party and no individual will be safe from political espionage.

That is the nub of the issue. Can the media sweep the resonant possible crime under the rug in order to demonize a completely unremarkable and well-justified political tactic - raising the question of a candidate's pervious 42 day stay in a mental hospital as a factor voters might want to consider. If so, then we can expect there to be no private poltical discussions for conservative candidates.

If the progressives are able to keep the wrong end of the telescope view as the dominant narrative, we may be through the mirror, people. If the FBI investigation underway is unable to determine a crime was committed, then mean old Mitch held to a different standard than any Democrat will be what people remember when they vote in November 2014.

Update. Check out this propaganda from the regional main page of the Washington Post: 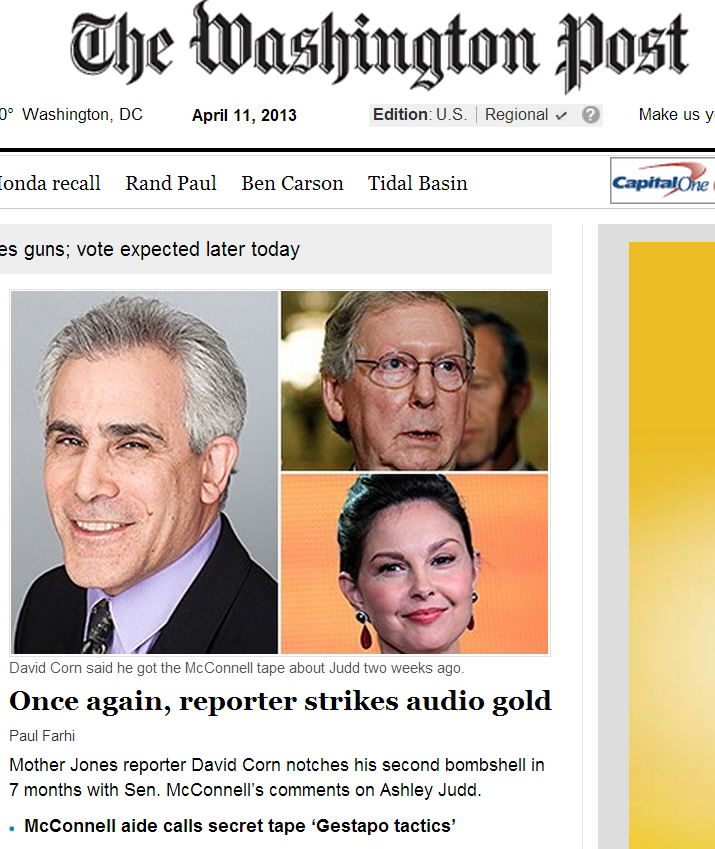