Warning: mysqli_free_result() expects parameter 1 to be mysqli_result, bool given in /var/www/html/americanthinker/admin/common/functions/func.general.php on line 126
 Shaming the MSM on abortion house of horrors blackout - American Thinker
« RIP Jonathan Winters | Korean Cyberwarfare Update: Leaving The Keys In The Car »
|

Shaming the MSM on abortion house of horrors blackout

The progressive media are deliberately ignoring the horrifying practices of Dr. Kermit Gosnell, the Philadelphia abortionist who executed babies born live and is now on trial for murder. Mark Steyn does not mince words: "The U.S. media's unanimous agreement to see no evil is sick and totalitarian."

At this stage of media corruption, the only option we have in facing such evil is public shaming and ridicule. We must demand answers as to why they ignore such a compelling story, and when we get them, we must parse them and ridicule the self-serving rationalizations. They are whoring out their journalistic principles and desperately suppressing information that is harmful to their ideological positions. We have to call them on it every chance we get. Most progressives cannot admit to themselves the truth of their positions. They prefer to live in a fantasy world of perfectible human nature -- the cause which justifies any means.

On the pages of USA Today, Kirsten Powers, a liberal commentator with the integrity to criticize her side when she sees it in error, calls out the media:

Infant beheadings. Severed baby feet in jars. A childscreaming after it was delivered alive during an abortion procedure. Haven't heard about these sickening accusations?

It's not your fault. Since the murder trial of Pennsylvania abortion doctor Kermit Gosnell began March 18, there has been precious little coverage of the case that should be on every news show and front page. The revolting revelations of Gosnell's former staff, who have been testifying to what they witnessed and did during late-term abortions, should shock anyone with a heart.

This column breaches the liberal cofferdam around the Gosnell story. It is a good start. Even better, Matt Drudge is featuring the story of the cover-up prominently on his home page today.

Drudge also links to the public humiliation that is beginning for one Sarah Cliff, reporter for the Washington Post who tried to rationalize away her suppression of the Gosnell story on Twitter. John Sexton of Breitbart explains what Sarah tweeted and what reaction was elicited. 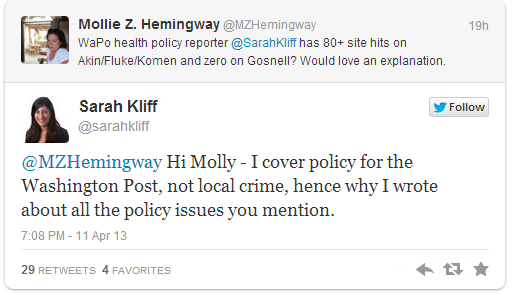 Billy Valentine, who works at SBA list had a pertinent response "Policy angle here is whether abortion clinics should be regulated. A national issue as many states enacting regs." Exactly! How is it possible that Newtown leads to a national discussion on gun violence and policy led by the President himself but Gosnell's house of horror leads to not one word anywhere about proper restrictions on abortion?

Gosnell should be a household name, and we have the internet and video means of distribution. The low information voters will never hear of him until he and the journalists who suppress the news becomes punch lines on late night television. We have our task laid out for us: break this story into the mainstream by making ignoring it quite painful and humiliating. Write to your local newspaper and television stations, and ask them why they are ignoring this story. Record their responses.

Update: Mollie, who wrote the original tweet questioning the WaPo reporter at Patheos.com has terrific coverage of the story. Excerpt:

God forbid we go big and actually discuss abortion policy in general - something Kliff is usually quite keen to do. (Here's her 2010 piece for Newsweek headlined Remember Roe!)

Kliff is hearing from her readers now - mostly I know about this since literally hundreds of them are copying me on their responses. To put it quite mildly, they find her justification attempt stunning, disingenuous, callous, laughable and far, far worse. The most charitable response was this one from Billy Valentine:

so who at @washingtonpost SHOULD be covering Gosnell if not you?

She hasn't responded. It seemed obvious to me that the reporter at the Washington Post who writes so prolifically and passionately about abortion rights would cover this story. She says, however unconvincingly, that a major abortion story suddenly isn't her beat. OK. Fine. So who at the Washington Post should be covering this major story with national implications? Let me know and I'll ask them about it. 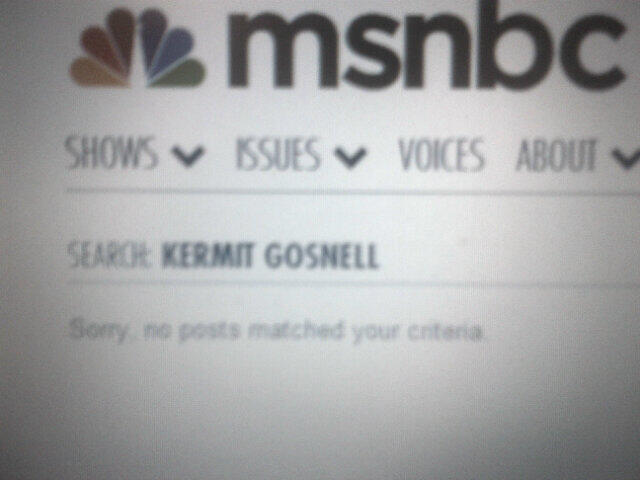 Update from The Looking Spoon: 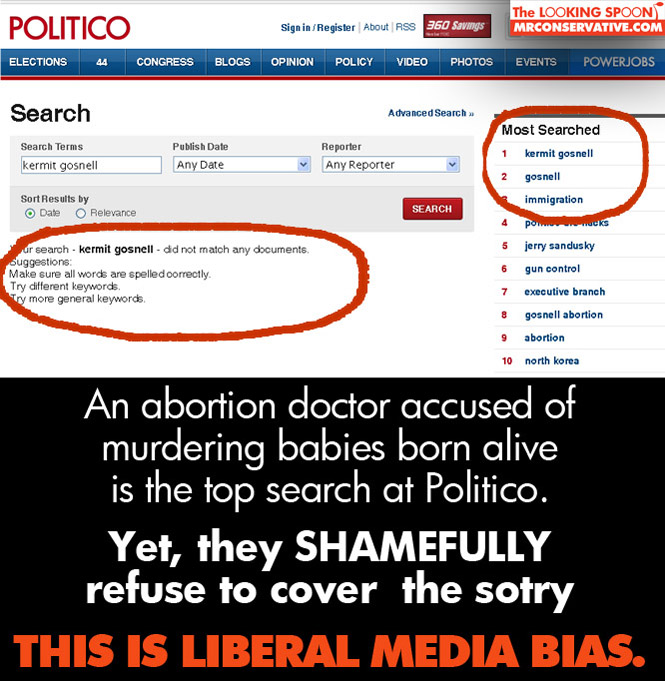