Warning: mysqli_free_result() expects parameter 1 to be mysqli_result, bool given in /var/www/html/americanthinker/admin/common/functions/func.general.php on line 126
 Army scraping off biblical reference from weapons scopes - American Thinker
« Bloomberg: Interpretation of Constitution must change | Bostom Interview With Andrea Tantaros on the Tsarnaev's Jihad »
|

For years, weapons scopes supplied to the Army by a company called Trijicon ("Brilliant Arming SolutionsTM")have carried serial numbers ending in JNB:12 and 2COR4:6. To the biblically untutored, they appeared to be just a continuation of an alphanumeric sequence. But to people familiar with the Bible and citations therefrom, these sequences signify Bible verses.

When someone in the Army took notice, possibly following an irate complaint from an atheist clued in by a comrade, a small version of hell broke loose. They must go! Todd Starnes of Fox News has the story.

The U.S. Army is directing troops to remove a Bible inscription that a vendor etched into the serial numbers of weapon scopes, Fox News has learned.

Soldiers at Fort Wainwright in Alaska told Fox News they received a directive to turn in their scopes so the Bible references could be removed. 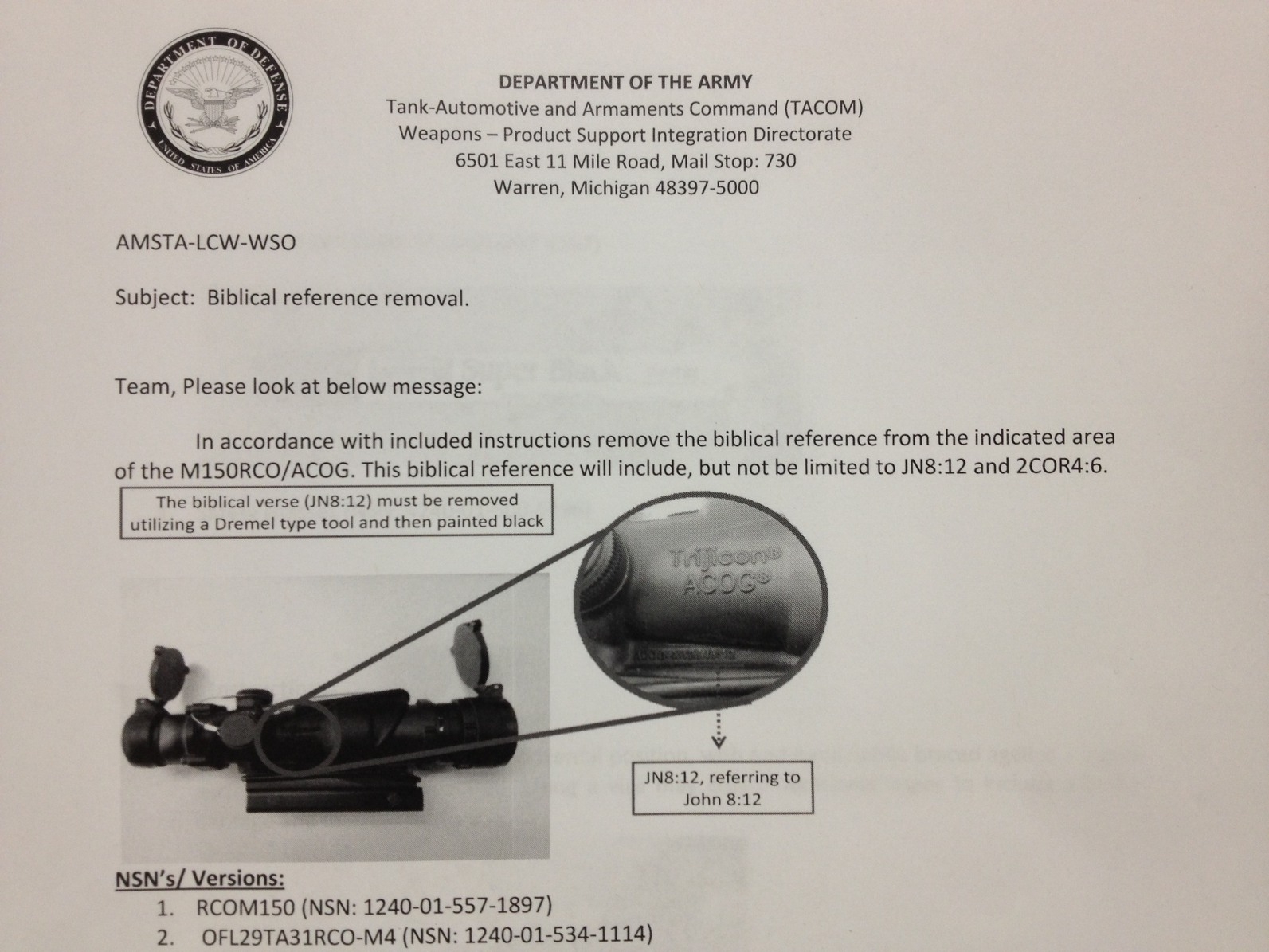 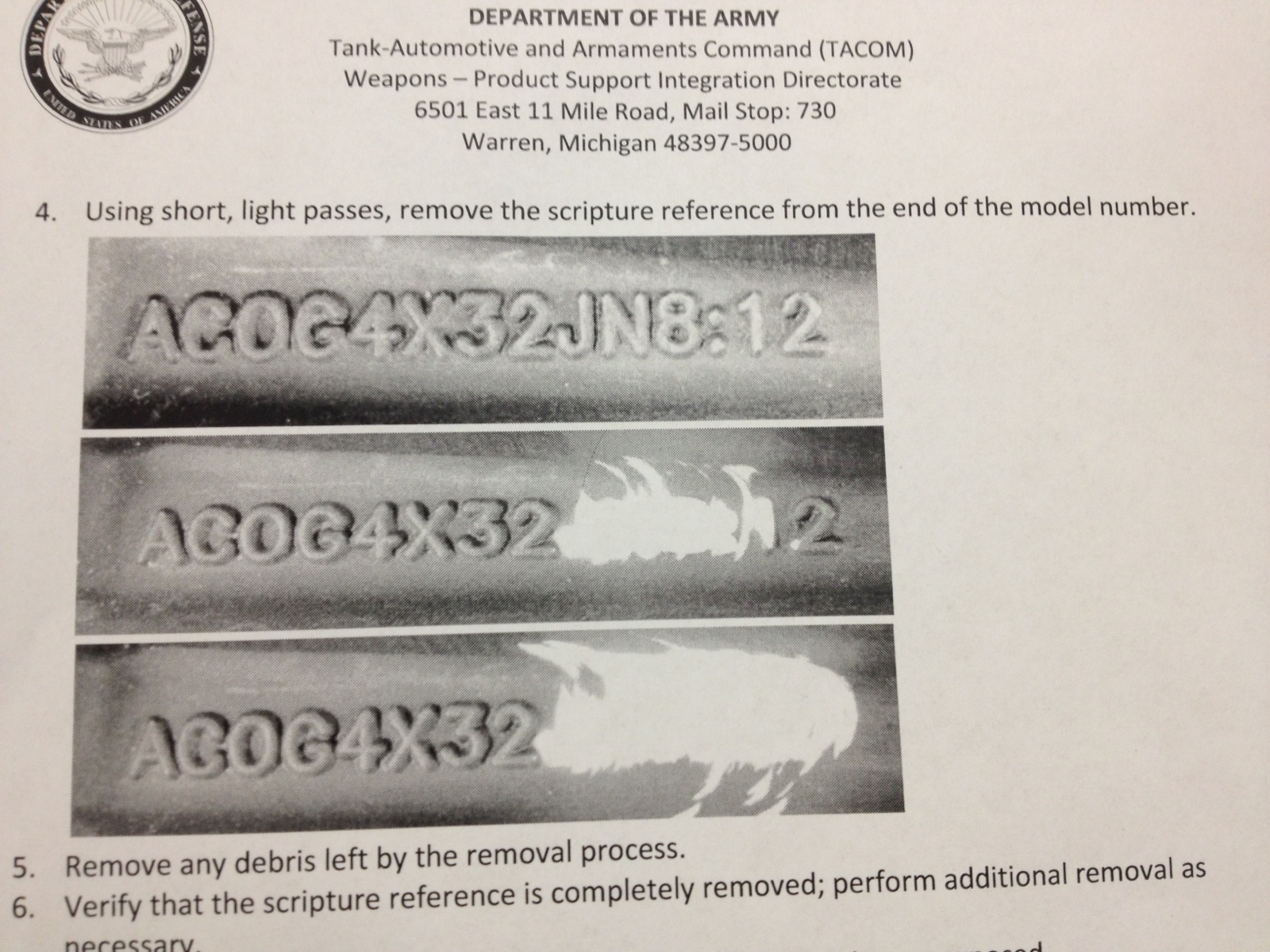 "The biblical verse (JN8:12) must be removed utilizing a Dremel type tool and then painted black," read instructions on how to remedy the matter.

"The vendor etched those inscriptions on scopes without the Army's approval," Army spokesman Matthew Bourke told Fox in a written statement. "Consequently, the modified scopes did not meet the requirement under which the contract was executed."

Future deliveries fo the scopes will omit the offensive alphanumeric sequences, it is reported.

The most famous commercial example of biublical verse references printed where most people won't notice them is the In-N-Out Burger beverage cups. If you turn one over, you see: 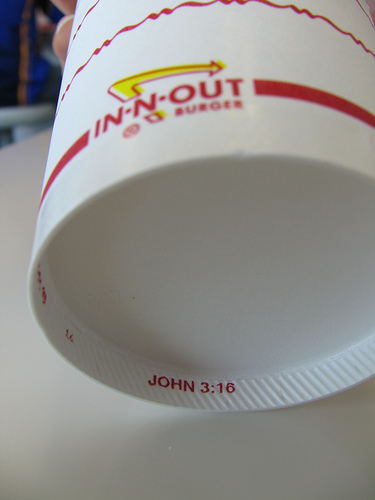 This practice is so well known, it has generated parodies: 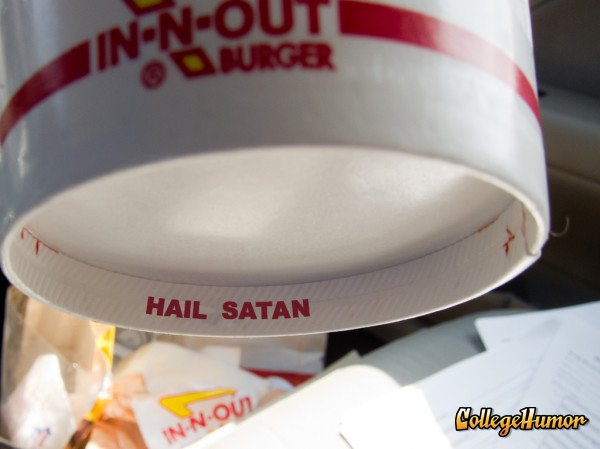 I suppose that once could imagine a security aspect to this order, much though I would like to attribute it to the prevailing anti-Christian bias in the ruling class. In Islamic countries, the verse references could be taken as evidence of a religious war waged on behalf of Christianity. While it is true that our Islamist enemies believe themselves to be fighting a religious war against infidels like Christians, Hindus, and of course most vehemently, the Jews,  current doctrine in our effort requires denying that a religious war is underway, so as to offer a fig leaf to any Muslim regimes that cooperate with us.