Warning: mysqli_free_result() expects parameter 1 to be mysqli_result, bool given in /var/www/html/americanthinker/admin/common/functions/func.general.php on line 126
 A Name to Live up To - American Thinker
« Media overkill in my neighborhood | NY Times marks 70th anniversary of Warsaw Ghetto uprising with jab at Israel »
|

A Name to Live up To

Tamerlane (properly, Timur the Lame, 1336 -- 1405) just happens to be one of the most brutal conquerors in recorded history. Tamerlane was a 14th-century successor to the khans. He is noted -- if that's the word I'm groping for -- for the sheer viciousness and gratuitousness of his conquests, which put the actions of predecessors such as Genghis Khan in the shade, and remained unmatched until the 20th century.

Over a period of 40 years, Tamerlane's armies roamed Central Asia annihilating everything they encountered. Tamerlane's specialty lay in executing the entire populations of captive cities. His path was marked with pillars and pyramids of the skulls of his victims. While the story that portrays him as riding up such a pyramid on horseback may be apocryphal, it provides a clear image of Tamerlane as he was. 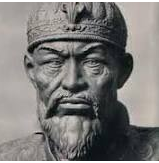 Tamerlane had no interest in governing or administration. What he conquered he destroyed, and what he destroyed remained destroyed. Thriving cultures had existed in Central Asia going back into prehistory. This largely ended with Tamerlane.

In 1398, Tamerlane attacked India, ravaging the Deccan region in what master military historian John Keegan termed one of the most pointless military campaigns on record. So thorough was the destruction that the Deccan remains a particularly backward area of India to this day.

Moving west, Tamerlane conquered Iraq, Syria, and most of Turkey. Europe waited in terror for his next move. But in 1404 Tamerlane decided instead to conquer Ming China. An unusually cold winter decimated his army on the march, and Tamerlane himself fell ill and died in February 1405.

Though he never reached Europe, Tamerlane remained a figure of terror for centuries following his death.

What might have been going on in the heads of parents who chose to name their child for such a figure is beyond easy surmise. But here's a memo for any proposed new immigration regulations: no entry for people named after genocidal Tatar conquerors.

Somebody else can look up "Dzhokhar." I don't think I could stand it.