Racial sensitivity is a minefield for Americans, and not just whites. A black schoolteacher in Broward County, one Leslie Rainer, has discovered that while blacks apparently can use the n-word, the word "chocolate" applied in any way to a black child in a classroom is enough to get suspended from her job.  WPLG TV reports:

The School Board of Broward County voted Monday to suspend a teacher accused of calling an African-American student "dark chocolate, the kind that nobody wants."

The board voted unanimously to suspend Leslie Rainer five days without pay, agreeing with an administrative law judge who reviewed the case. (snip)

The student recorded Rainer on video pointing the pointer at him and making the statement, "You got one time, chocolate," before his classmates erupted in laughter.

"He found it offensive," said Carmen Rodriguez, the schools' district attorney. "He found it hurtful and he was so frustrated because he couldn't respond because this was his teacher."

Rainer said she was referring to actual pieces of chocolate on her desk that she hands out as treats during class.

Rainer's lawyer tried to convince the school board that "chocolate" is a term of endearment in the black community (as the n-word is reputed to be).

The media in Broward County are not playing up the race of Leslie Rainer in their reporting of the matter. If you read the WPLG report, you will note that her race is not mentioned, though the video makes it obvious. 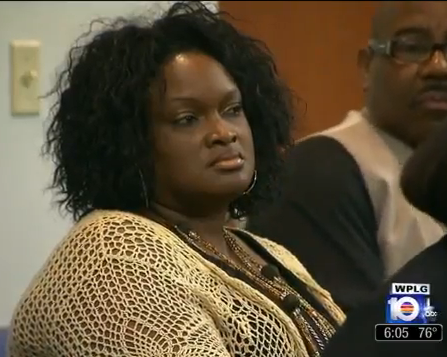 I have to wonder if the print media would have reported the race of a white teacher accused of the same racial offense. My guess is that they would have played it up.

The Broward County School Board's doctrine that students should not have their feelings hurt, at least when race (and certain other topics? religion? sexuality?) is involved seems quite dangerous to me. Humiliation is a great teaching tool, especially when it comes to young people. Peer pressure is an overwhelming force, and using class laughter against someone who has misbehaved or underperformed helps form a norm of performing up to expectations in a classroom. Creating such a culture is the key to motivating students to excel.

I can't speak to Ms. Rainer's effectiveness as a teacher, and she does sound like a bit of a hothead:

In 2010, Rainer was re-assigned after another teacher alleged Rainer threw holy water on her because she is an atheist.

Nonetheless, it upsets me that Americans have to devote considerable thought and effort into conforming with and ever-expanding set political sensitivities, and that the penalties for infractions against the vague rules can be extreme. I remember learning of the caution Russians had to exercise during the Stalin era, lest someone denounce them to the secret police as subversives. Back then, I pitied them their lack of freedom and the veer present risk they faced. How times do change!