When I read the first reports of this story, I was shocked. And I don't shock easily. But this story is on its way to a happy ending, thanks to public pressure.

A Florida television station, WPTV,  reported recently that the well-known veterans' charity, The Wounded Warrior Project, had refused to take a donation of money collected by children at a Baptist school and funds from a planned special church collection. This is an emotional story, but that cannot be avoided when someone turns down a patriotic gift from grade school children and their parent to wounded American soldiers. WPTV's video told of a church donation of up to $50,000 being initially refused.

The details were also reported by GOPUSA, while The Blaze posted this:

It wasn't until after Liberty Baptist Church and Academy had already paid a $100 registration fee to raise funds for Wounded Warrior Project that the they received an email from the non-profit organization.

Here is a copy of the actual letter sent to the Liberty Baptist Academy, as posted on The Blaze. 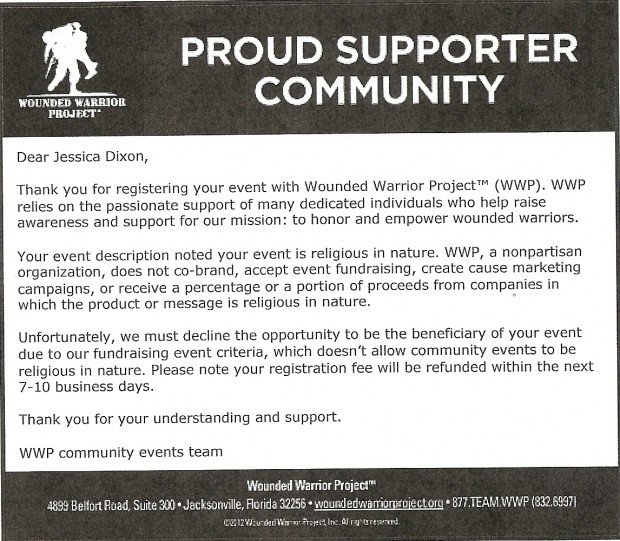 But there has been an update to this story, due to the uproar on the internet and elsewhere. GOPUSA reports that:

But now it appears the Wounded Warrior Project has had a change of heart. In a follow-up story, Todd Starnes reports that "the Wounded Warrior Project has apologized for rejecting donations from a Baptist church and said the incident was 'blown out of proportion' even though the organization's website states that religious donations are not accepted.

The spokesperson said the charity does not have a policy banning religious groups from hosting fundraisers. WWP said the event was rejected because the church would be 'soliciting funds' and they would be doing so over an entire month.

"The truth is - it was a mistake from a junior staff member," the spokesperson said. "We register religious events on a regular basis and always have."

So what is going on here? Did the Wounded Warrior Project organizers commit a simple mistake, or are they bowing to public pressure. If funds from religious events are accepted on a "regular basis," then why does the web site state differently? And why did the e-mail received by the school also state that the funds raised by the church would not be accepted because of the religious nature of the fundraising event?

It's great to see the Wounded Warrior Project do the right thing here. The real question is what happens in the future, and why is there a conflict between what is being said by the WWP spokesman and what appears on their web site?

There are far too many questions here.