Even the normally well-modulated NPR is calling the success of Beppe Grillo in the Italian elections "stunning" and "astonishing."

With ballots from about 98 percent of polling stations counted in Senate races, Interior Ministry figures showed Bersani and his allies had 31.69 percent while Berlusconi and his coalition partners were pulling 30.65 percent. Grillo had 23.77 percent. (snip)

Grillo's forces are the greatest unknown. His protest movement against the entrenched political class has gained in strength following a series of corporate scandals that only seemed to confirm the worst about Italy's establishment. If his self-styled political 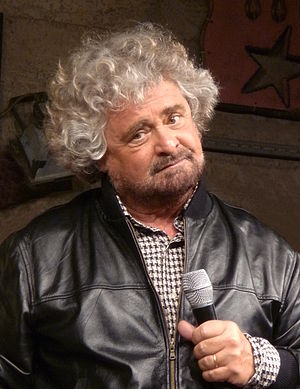 "tsunami" sweeps into Parliament with a big chunk of seats, Italy could be in store for a prolonged period of political confusion that would spook the markets. He himself won't hold any office, due to a manslaughter conviction.

"Italy has developed a two-bloc system. We now have a three bloc system!" Walston said, referring to Grillo's shock success.

Justine Aristea and I have documented Grillo's beliefs (here, here, and here), which can be found on his website. He is a conspiracy theorists and his main target is the Jews, who are responsible for all the bad things in the world.

His website mentions "Jews" 2,500 times, and Iran about the same number of times. Iran is good, Jews are evil.

Both NPR and this Guardian story completely skip this side of Grillo. However, we have the links in the AT articles, with more to come.