Warning: mysqli_free_result() expects parameter 1 to be mysqli_result, bool given in /var/www/html/americanthinker/admin/common/functions/func.general.php on line 126
 O Hobby Lobby, Art Thou a Religious Employer? - American Thinker
« Castro fuels rumors of a Chávez death watch | Look who is taking care of Obama's stepmother »
|

Last week, Hobby Lobby, a Christian-owned chain, said it will defy the U.S. Department of Health and Human Services (HHS)' contraception/abortifacient mandate.  The owners, who oppose abortifacients but not contraceptives, claim that the abortifacient part of the mandate violates the owners' and Hobby Lobby's religious liberty.  Since January 1, 2013, Hobby Lobby has faced up to $1.3 million in fines per day for not offering abortifacients to its employees through health insurance plans.

The company's pursuits and products are not religious; it operates a chain of retail businesses that sell "a variety of art and craft supplies, home décor, and holiday decorations[.]" ... The company was not organized for carrying out a religious purpose; its Articles of Incorporation makes no reference at all to any religious purpose[.] ... The company does not claim to be affiliated with a formally religious entity such as a church or that any such entity participates in the management of the company. Nor does the company assert that it employs persons of a particular faith; indeed, quite the opposite[.] ... the company "welcomes employees of all faiths or no faith[.]" ... In short, there is no escaping the conclusion that Hobby Lobby is a secular company[.]

However, I've argued before that according to Samuel Johnson's A Dictionary of the English Language (1755), the most widely used dictionary at the Constitution's ratification, the Founders understood religious employers to be simply "employers who, in any way, are disposed to religious duties or teach religion."  Johnson defined "religious" as broadly as "pious; disposed to the duties of religion" and "teaching religion," with "to teach" taking such definitions as "to instruct; to inform" and "to deliver any doctrine or art, or words to be learned."  Thus, examples of the Founders' "religious employers" include employers who close their stores on Sundays, pray before business meetings, or display in their front offices such religious items as the Ten Commandments or the Star of David, a Buddha statue, or replicas of Leonardo's "The Last Supper."  The Founders' "religious employers" could also be employers whose websites feature a Bible verse or other religious message, such as John 3:16's "For God so loved the world that he gave his only Son[.]"

In their lawsuits against the HHS mandate, Hobby Lobby and other religious employers (over 110 employers have sued HHS) have actually proved they're "religious" according to the Founders' understanding of "religious" employers.  For example, Hobby Lobby argued it's religious because it employs "full-time chaplains to meet ... employees' spiritual ... needs" and "close[s] all ... [its] stores on Sundays."  Also, O'Brien Industrial Holdings, LLS, a Catholic employer with some legal success against the mandate, said that O'Brien is religious because "[p]rominently displayed in the company's lobby is a statue of the Sacred Heart of Jesus."  Another example is the assertion by Catholic-owned Hercules Industries, Inc. that it's religious because, among other reasons, it "has donated hundreds of thousands of dollars to Catholic parishes, schools, evangelical efforts, and charitable causes[.]" 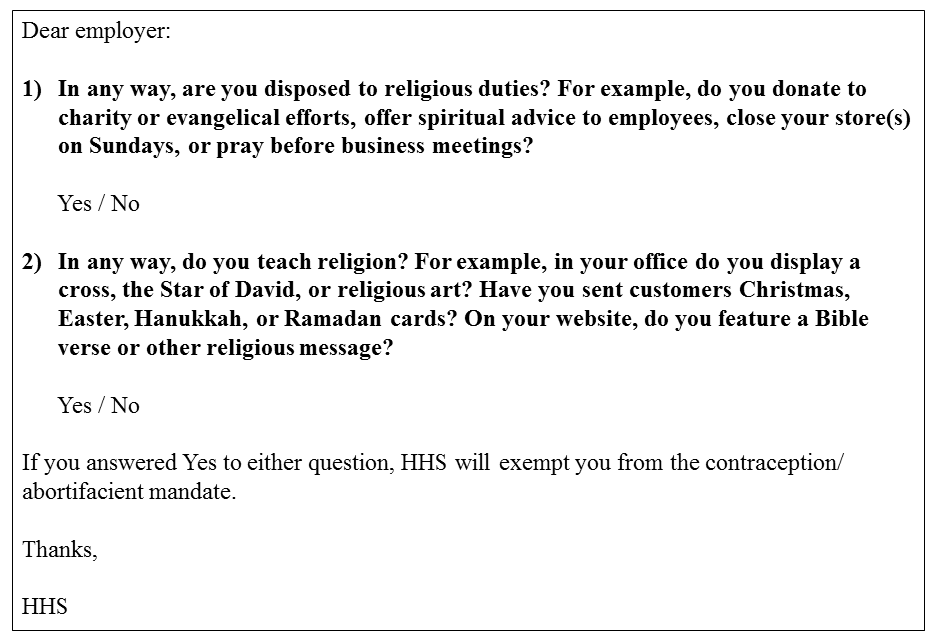 Would using such a form to determine an employer's religiosity make the HHS mandate unworkable, as many employers could claim exemption?  Perhaps, but such is the folly of imposing a mandate that violates religious liberty and liberty in general.  According to the sample form above, Hobby Lobby, O'Brien, Hercules, and similar employers are religious employers.  If HHS uses the form, U.S. employers who aren't religious according to the Founders but who oppose the HHS mandate should sincerely find religion.