There has been much premature angst expressed over the bankruptcy of Hostess Brands, on the assumption that Twinkies are in danger of disappearing from the shelves of the nation's Seven-Elevens. In fact, most observers presume that the brand name Twinkie as well as the product formulation will be sold to another company, where, lacking the costly Teamsters contract work rules that crippled Hostess, Twinkies will find a profitable sugary destiny.

But when a brand name product disappears and its name goes unused for 3 years, the name reverts to the public domain, and may be registered in the name of a new owner. Such back-from-the-dead brands are informally known as "zombie brands." And they have become a minor, slightly ghoulish, industry. 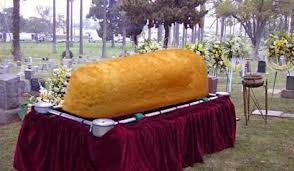 A brand new blog, To Put It Bluntly, published by a friend of mine, Lawrence Siskind (Larry has written for AT in the past) has just debuted, and takes up the ins and outs of zombie brands in one of its first posts. Larry is a distinguished San Francisco lawyer, and applies his analytical mind (as well as his sense of humor) to a variety of topics:

Companies like Strategic Marks of Irvine, California, identify lost marks and try to revive them without the authorization of their erstwhile owners.  Most see these marks the way the Coroner of Oz saw the Wicked Witch of the East, as "not merely dead, but really most sincerely dead."  But to Strategic Marks and its audacious founder Ellia Kassoff, these marks have an afterlife.  They see them the way Miracle Max saw Wesley, the hero of The Princess Bride: "only mostly dead."  And as Miracle Max explained: "There's a big difference between mostly dead and all dead.  Mostly dead is slightly alive."

Such marks are popularly known as "zombie" marks.  For all intents and purposes, zombie marks are dead.  The products with which they were once associated, have disappeared from the shelves and showrooms.  But if these marks are corpses, they are not completely cold corpses.  They retain some warmth in the form of the public's fond memories and associations. (snip)

Kassoff noticed that Macy's Inc., which years earlier had acquired the rights to famous department store marks such as FILENE's and JORDON MARSH, had retired those brands and converted their stores to the MACY'S nameplate.  So he decided to pick them up off the ground, like a lost bill.  He applied to register the marks with the U.S. Patent and Trademark Office, and announced plans "to bring back the old shopping experiences and brands you remember....  Something we believe has been lost."

Macy's filed oppositions to his applications, and then sued Strategic Marks in federal court in San Francisco.  Its lawsuit, now pending, will probably be decided on the basis of the legal test of "abandonment."

There is a lot more detail on the case lending, but also a fair amount of wry commentary. Check out To Put it Bluntly for yourself.