Warning: mysqli_free_result() expects parameter 1 to be mysqli_result, bool given in /var/www/html/americanthinker/admin/common/functions/func.general.php on line 126
 Gun-grabber meets karma (updated) - American Thinker
« Michigan - yes, Michigan - will be a right to work state | The Prerequisite for Servitude »
|

Illinois state senator Donne Trotter has gotten himself into a hole and can't seem to stop digging. You see, the good senator is an advocate of harsh gun control measures, and is an important co-sponsor of Governor Pat Quinn's latest bill banning "assault weapons" and large capacity clips. But on Wednesday, the solon got himself arrested at O'Hare airport for carrying a concealed handgun in his carry-on luggage.

After spending a night as a guest of the Chicago Police Department, Senator Trotter got himself 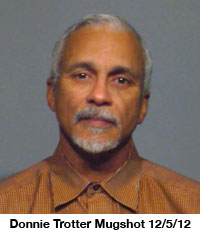 bailed out Thursday, and for good measure, vowed to remain in the race to replace Congressman Jesse Jackson, Jr., which, if successful, would have the virtue of maintaining the moral tenor of the seat, which has been held by such luminaries as ex Black Panther Bobby Rush, and Mel Reynolds, who was convicted of seducing an underage girl while in office. This is the very same congressional seat that Barack Obama unsuccessfully ran for.

But Trotter may be getting himself into more hot water, because of the excuse he gave to the police to explain his possession of the firearm. Warner Todd Huston writes in The Prairie State Report:

He claimed he forgot the gun in his luggage and that it is from his "job" as a security guard. But this is a flat out lie. He has no such job.

Donne Trotter claimed that he is a "security guard" for a company called Allpoints (also called All Points Security). This is why he needed the .25 caliber pistol, said the lawmaker. But does he have such a job?

First of all, Trotter was in Springfield in session all day long. Are we to believe he was in the State Senate chambers all day then ran off to Chicago to be a "security guard," then ran to O'Hare to catch a flight to Washington D.C.? The timeline is rather suspect, wouldn't you think?

Then, Donne Trotter does not once mention this "job" in his financial disclosure. How can you have such a job without mentioning it as part of your annual income stream?

So on top of his gun crime, the gun grabber may have lied to law enforcement. Or else, he had a job that he failed to report on his financial disclosure forms.

The rank hypocrisy of gun grabbers who themselves carry guns (or enjoy armed guards) is disgusting. He may not have much pull with President Obama, because when both men were running for the same congressional seat, he said this about then state-senator Obama:

Barack is viewed in part to be the white man in blackface in our community. You have only to look at his supporters. Who pushed him to get where he is so fast? It's these individuals in Hyde Park, who don't always have the best interest of the community in mind.

If he can be honest about Obama, how about fessing up about his purported security guard job?

According to the Chicago Sun-Times, the security company employing Trotter has been paid more than $350,000 as a subcontractor on a City of Chicago security deal and is represented by a politically powerful lobbying firm run by Gery Chico, a onetime top aide to former Mayor Richard M. Daley, the Sun-Times reports.

A Daley machine guy. And according to this report, he was favored to get the party's endorsement for the House seat:

Quinn and other politicians ABC7 contacted reserved judgment on Trotter, who as recently as last week was mentioned as a candidatefavored by Democratic party leaders to replace the resigned 2nd District Congressman Jesse Jackson Jr.

"Until there is something that points to him being guilty, people made promises to him so they are not going to cut and run," U of I Institute of Government & Public Affairs Professor Cedric Herring said. "They are going to support someone who has the political power."

Before the arrest Wednesday, Trotter had a virtually unblemished political and personal record.

"Almost a lifetime of Mr. Trotter's dedication to service in the House and the Senate. It's over 20 years," said Herman. "I spoke also of his dedication to his family: 26 years married he has four kids, six grandkids."

Politically speaking, Trotter's problem is timing. His next court appearance is Wednesday, December 12. The Democrats meet to decide which candidate they will endorse on December 15.

If Trotter continues to seek the endorsement, he'll do it for the time being as an accused felon.

You have to love the symbolism of the Dems debating whether or not to endorse an accused felon (and hypocrite). Because the mainstream media are not going to hype this story, it is up to conservatives to make this clown an object of widespread ridicule. The Achilles Heel of the Left is the triple crown of corruption, favoritism, and hypocrisy.