« In nation's capital, the government robs from the poor and gives to the rich | NY Post: Second Amendment is 'obsolete' »
|

A professor at a taxpayer-supported state university has called for the murder of the president of the NRA. Apparently the carnage in Newtown, Connecticut was not enough slaughter to satisfy the blood lust of Erik Loomis, PhD, assistant professor of history at the University of Rhode Island. Oliver Darcy of Campus Reform reports:

A professor of history turned to Twitter over the weekend to call for the death of National Rifle Association (NRA) CEO Wayne LaPierre, branding the gun rights group he heads as a terrorist organization.

"[I] want Wayne LaPierre's head on a stick," Erik Loomis, a professor at the University of Rhode Island (URI),tweeted.

It "looks like the National Rifle Association has murdered some more children," he added."

Can [we] define NRA membership as dues contributing to a terrorist organization?" he  asked in a separate tweet.

Loomis' comments come on the heels of the massacre at Sandy Hook Elementary School, which left 20 young children and six faculty members dead.

"You are goddamn right we should politicize this tragedy," Loomis tweeted. "[F]uck the NRA."

"Dear Republicans, do you know the definition of family values?" he continued. "It's not having our kids FUCKING SHOT AT SCHOOL! Fuck the NRA."

Professor Loomis, who received his PhD in history from the University of New Mexico in 2008, 12 years after graduating from the University of Oregon, has a history of violent rhetoric directed against conservatives. In March of this year, he called for a "decades-long fight to the death [against conservatives]. That's the nation's only hope."  The questionable rhetoric appeared in an essay ironically titled, "Are Conservatives Any Crazier Today Than 50 Years Ago?" Clearly the professor, who has violent impulses is projecting his own character flaws onto conservatives, in my opinion.

Consider that this man has been given the trust of education young minds, and his history of intemperate and violent language. And to top it off, he is now playing a victim, because people have noticed and commented on his tweet. College Insurrection reports:

Read the Twitter feed for Loomis - he fancies himself a Twitter martyr of such huge proportions he may even write a magazine article about his ordeal of having people quote what he said: 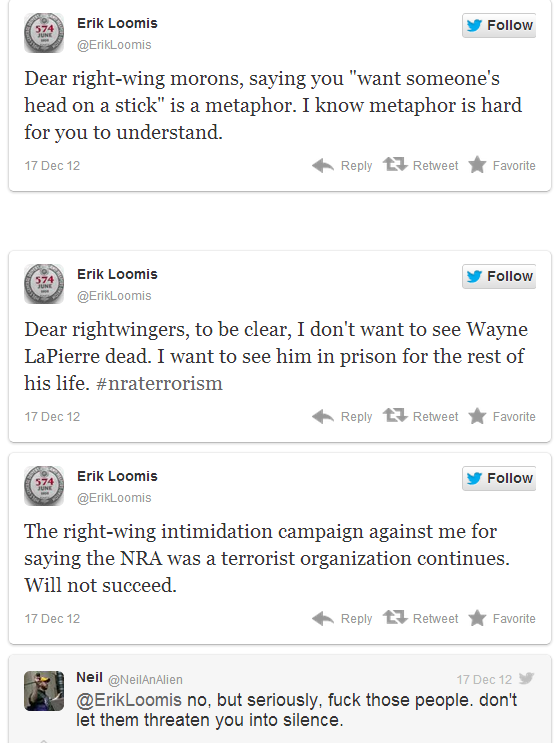 The anti-NRA syllogism seems to work this way: (1) Something bad happened; (2) I hate you; so (3) It's your fault. This sort of reasoning has played out in all sorts of places over the past century, with poor results. One would expect a history professor to know better.