Our Freedoms Are Not Easily Wrought

We left Portland at 3:30 PM for a seventeen hour flight to Seoul.  We chased the sun deep into Asia before it finally set a little before flying over Japan, about two hours from Seoul.  In the late 1980's, prior to 9/11, we were highly fortunate to spend some time with the aviators in the cockpit of that MD-11 triple engine jet airliner.  Those pilots explained just about everything in that cockpit and answered all of our questions - gracious and interesting men.  They even turned off the autopilot momentarily and exhibited just how difficult it is to fly a 600,000 pound jet airliner with 300 passengers.

Our purpose for flying to Korea was to help build a small church at a Christian university in Chonan, South Korea.  The 25 minute drive from Kimpo International to the bright lights of downtown Seoul moved my spirit as deep as anything ever has.  As I gazed out the windows, I noticed small red crosses dotting the landscape.  With every sense in me on full tilt, I noticed the same remarkable occurrence in the opposite direction.  These South Koreans exercised Freedom of Religion!   These six and eight foot high red crosses crowned small churches all across the land in every direction.

After our work on most days, and on weekend jaunts, we visited the open air markets.  I was so smitten by the colors, the seafood on ice, the live baby chicks, the fermented cabbage, the dried shrimp and everything about the culture, that I even walked the industrial retail areas of Chonan with deep fascination.

Just about everything at street level is half scale compared to America.  What I saw was a thousand living room size buildings with people selling produce, textiles, furniture, bicycles and anything else you might fancy.  What I saw was a thousand half size garages with roll tops up selling PVC pipe, windows, repairing tires, fabricating metal, and accomplishing every task imaginable under the sun.  It was unfettered capitalism and a free people pursuing their interests as so enchantingly described by Adam Smith's "invisible hand."

Some of you are thinking, "Ok fine. You noticed a few churches and some people doing business. Who cares?"

First, those people enjoy Freedom of Religion and the opportunity Free Enterprise grants them.  Their neighbors to the North suffer a dark country with a dictator who fantasizes about ballistic warheads while his people struggle for their basic needs.

Next, for someone who believes deeply in the conservative principles that our nation was founded on, the panorama of those ideas being lived out daily half way around the planet in a completely different culture is intellectually sensuous.  I am convinced that even our Founding Fathers would have nodded with venerable charm after observing the red crosses and the free markets in South Korea.

But, the freedom South Koreans enjoy came at a price - and freedom usually exacts an ultimate price.  All of those American military men that fought and came back home or fought and died there deserve our deepest respect, admiration and gratitude.  Thank God, thank God a thousand times over that there was no Jane Fonda or Walter Cronkite (who deeply and profoundly misled a trusting American public on the Tet Offensive) to poison the waters during the Korean War.

I have heard many say, "Those jungle and village people in Korea and Vietnam didn't have a clue about what we were fighting for."  Well, in South Korea they understand now.  Those students who routinely protest at Yoido Plaza in Seoul understand Freedom of Assembly very well.  By contrast those in China who wish to assemble risk their freedom and even their life.

A nighttime satellite photo of the Korean Peninsula speaks volumes.  In the North it is very dark.  Below the DMZ South Korea is full of light.  Below the DMZ there is light and freedom. 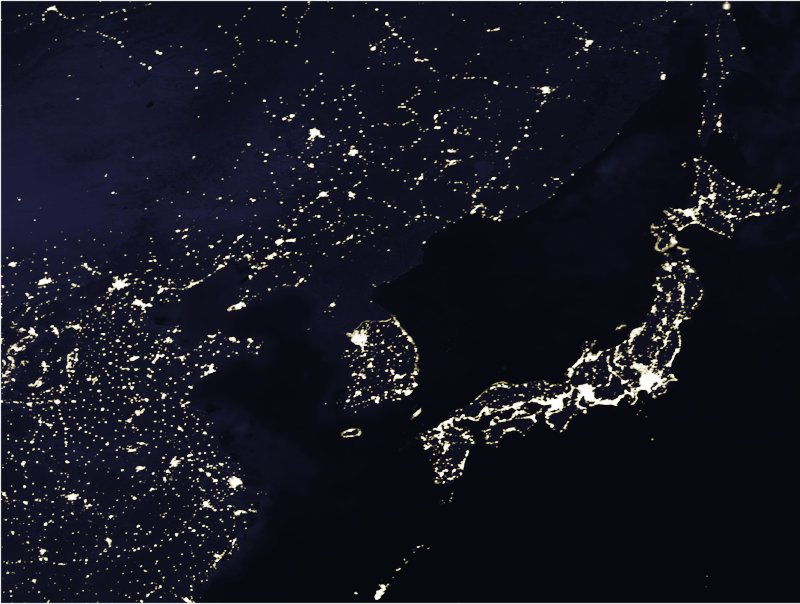 True freedom always has a price - and the price was worth it in the case of the founding of our nation, the Civil War, both World Wars, and the Korean War.

It is not the Occupy Wall Street types (that want taxpayers to pay off their student loans) who go off to war to maintain our freedom and gain freedom for others.  It is most often the brightest and best among us who serve and risk their very lives to support this great experiment called America.