Warning: mysqli_free_result() expects parameter 1 to be mysqli_result, bool given in /var/www/html/americanthinker/admin/common/functions/func.general.php on line 126
 How to Abandon Our Bravest Citizens in a War Zone - American Thinker
« Romney should point out that Obama even botched killing bin Laden | Putting Obama's 'Mammogram' Lie to the Test »
|

How to Abandon Our Bravest Citizens in a War Zone

Watching a video of a consulate being overrun while a credible defensive response is almost immediately available is criminally negligent.

CBS News has been told that, hours after the attack began, an unmanned Predator drone was sent over the U.S. mission in Benghazi, and that the drone and other reconnaissance aircraft apparently observed the final hours of the protracted battle...

The Pentagon says it did move a team of special operators from central Europe to the large Naval Air Station in Sigonella, Italy, but gave no other details. Sigonella is just an hour's flight from Libya. Other nearby bases include Aviano and Souda Bay. Military sources tell CBS News that resources at the three bases include fighter jets and Specter AC-130 gunships, which the sources say can be extremely effective in flying in and buzzing a crowd to disperse it.

To reiterate from the report, one choice was only an hour away: send one, two, or even three of the available AC 130 Spectre gunships overhead to lay down a murderous suppressive fire around the Benghazi consulate.  Apparently these gunships are frightening things to behold and terrifying to face.  According to several people who have firsthand experience with these aircraft, these planes are flying gun platforms bristling with multiple 20mm Gatling guns and rapid-fire recoilless 40mm and 105mm artillery.

Sending a gunship over the consulate might even have ended this engagement immediately by convincing the attackers to head home.  If two were 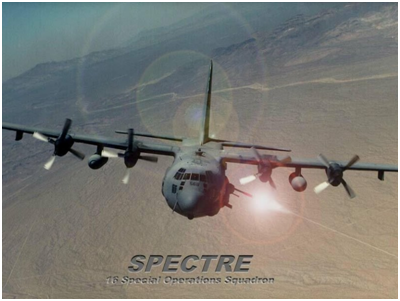 cycled, then nearly continual coverage would have been possible until a contingent of U.S. forces arrived to deal with what remained.

Instead, the White House did nothing.

To be clear: if this information is correct, two U.S. Navy SEALs did not abandon their posts.

Correction: for several hours, the White House watched videos of our men fighting off these animals, while they abandoned our brave men -- men whose lives were of more value than everyone in the White House who decided to do nothing and go to bed that night.

Yes, we should understand that employing the Spectres would have involved risks, one of which is sending military forces into a sovereign nation.  Yet from all appearances, Libya -- and Benghazi in particular -- is "Indian Country" and is completely lawless and largely ungoverned.  This of course begs for another point of order: revelation of what our U.S. ambassador was doing in such a dangerous and uncontrolled area to begin with.

Taking advantage of the firepower we have -- again, to preserve and safeguard the lives of the brave men we send abroad -- would send a message: U.S. interests and the safety of our diplomatic staff will be protected, and sovereign U.S. property will be vigorously defended.  Finally, our citizens in uniform must understand that they will not be abandoned.

No one gets left behind.

...Unless, that is, Mr. Obama is making the decisions.  In that case, you are just another inconvenient person to be thrown under the bus.  It's getting crowded under the Obama bus.  How long until he throws America under the bus?

Shame on our government, and shame on the people in the White House.