editor's note: this blog wqas written by Bill Schanefelt, not William Sullivan, as accidentally first posted. Our apologies to both gentlemen.

However, David Ferguson of Snicker Snack Baby has created a photoshop (Author note: you might have to try more than one browser to view the post)  that has another take on the presentation (inserting the famous cartoon of Islam's-Prophet-as-Bomb where Bibi displays his red line) that has not been widely-seen, and that is a shame, and, perhaps, a cause for concern. 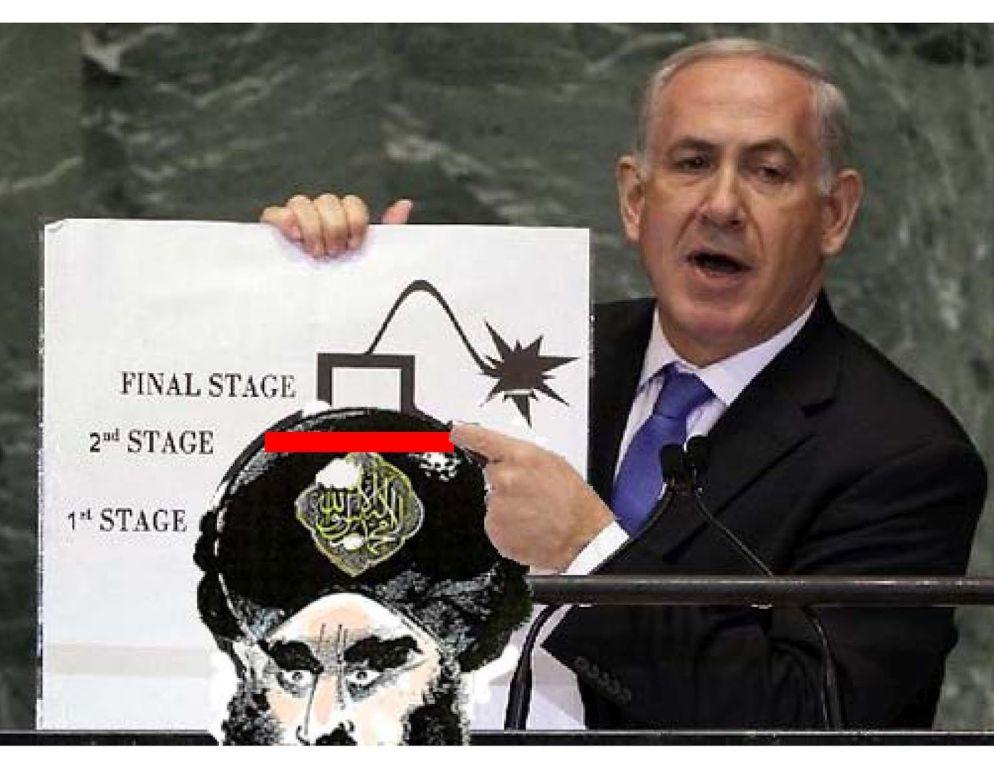 Scott Johnson of Powerline seems to have been the first to dare to post it saying:

At the risk of courting the condemnation of the Obama administration or a visit from local law enforcement authorities, we bring you reader (this) illuminating photoshop of (the presentation)....Come and get me, copper!

(I was) asked why I thought the cartoon was interesting; I hope that others perceive some of this themselves - a joke isn't really funny if it has to be explained, and a picture is worth a thousand words - but for those who are curious, my thinking is that this cartoon works well because it packs in so many mutually interacting messages (whether or not intended by the author)....imagine Netanyahu actually displaying this cartoon in the UN....(it) likely captures pretty well...what Netanyahu is actually thinking....Political cartoons, I think, are especially interesting when there's a lot going on conceptually in a very limited visual composition. This one, it seems to me, is an especially good example of that.

Read it all here.

That the photoshop has not been more-widely-reproduced poses a question that begs to be answered: Why?

To be sure, Mr. Ferguson's blog is not near the top of any published list, but Instapundit tops or is at the top of many lists, and Powerline is not too far down the line---the same can be said for Mr. Volokh's.

The answer to the questions seems to be "Fear," but "Fear" of what?

Mr. Johnson jokingly suggests that it may be "Fear" of the Obama administration's or law enforcement's actions.

Many bloggers have 'dared' to post the famous cartoon of Islam's-Prophet-as-Bomb, but seem to shy from posting this one.

Maybe it is "Fear" of inciting further violence amongst the 1.5 billion calm, adherents of the 'Religion of Peace,' but it may well be a "Fear" of having Bibi being seen as a blasphemer.

Whatever the "Fear" be, it, the "Fear," surely is a shame, and, perhaps, a cause for concern, and I invite readers to challenge my assumption and to posit their own answers to the question.