Warning: mysqli_free_result() expects parameter 1 to be mysqli_result, bool given in /var/www/html/americanthinker/admin/common/functions/func.general.php on line 126
 A BBC pedophilia scandal has a New York Times connection - American Thinker
« How Close is the Obama Administration with Israel? | Reforming the Leviathan state »
|

A BBC pedophilia scandal has a New York Times connection

Labor unrest and dreadful financial losses aren't all the New York Times has to worry about. A pedophilia scandal now rocking the BBC -- one eerily similar to the Jerry Sandusky scandal -- may prove an embarrassment to the New York Times and raise eyebrows yet again over the management capabilities and judgment of Arthur Ochs "Pinch" Sulzberger, Jr.

London police are now investigating numerous allegations that the late BBC host Jimmy Savile was a pedophile who had a hearty appetite for underage girls, possibly molesting or raping dozens of them, including some on the British Broadcasting Company's property. Savile's alleged victims started coming forward after he died in November, 2011, at the age of 84. Now, sordid tales about the eccentric celebrity's alleged sex abuse are making lurid headlines in Britain - and provoking speculation that top BBC officials turned their heads to what was happening. 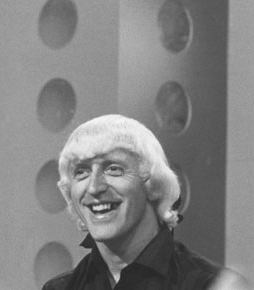 One of those BBC officials is none other than Mark Thompson, set to become the New York Times new president and chief executive next month, following years at the BBC, including as director general of the taxpayer-funded network with a decidedly left-leaning worldview. Thompson was Sulzberger's pick to turn around the Times, and his compensation -- to the outrage of a newsroom reeling from budget cuts and layoffs -- includes an annual salary of $1 million and an immediate signing bonus valued at $3 million.

Savile was best known for his BBC show "Jim'll Fix It," which ran from 1975 to 1994 and that involved Sevile granting "supplicants (usually children) their dearest wish: to tame lions, to fly the Concorde, etc.," according to his obituary in the New York Times last year. He was involved in charity work and was knighted in 1990. Interestingly, though, Savile's predatory sexual behavior appeared to have been an open secret in the television industry.

To its credit, the Times on Sunday mentioned Thompson's potential role in the scandal in an article by Sarah Lyall, "Silence on Abuse Reports Plunges BBC Into Scandal." Among other things, her article raised questions about what Thompson knew; when he knew it; and whether he was involved in a cover-up.

Explaining how the revelations of alleged child molestation have affected the BBC, Lyall writes:

The scandal has engulfed the corporation, which failed to investigate rumors or take seriously accusations about his behavior at the time. Perhaps even more damningly, it canceled a segment about the allegations that was scheduled to be broadcast last December on "Newsnight," an influential evening current-affairs program.

About the same time, the corporation broadcast three tributes to Mr. Savile, who died last year at 84.

The BBC has said that the "Newsnight" segment was canceled not out of concern about the corporation's reputation, but for "editorial reasons," because the accusations could not be substantiated. But on Friday, its new director general, George Entwistle, announced that an independent panel would investigate whether any BBC executives improperly pressured "Newsnight."

The director general of the BBC at the time the segment was canceled was Mark Thompson, the incoming president and chief executive officer of The New York Times Company. In a letter sent to members of Parliament on Friday, a BBC spokeswoman said neither Mr. Thompson nor Mr. Entwistle was involved in the "Newsnight" decision.

He added: "During my time as director general of the BBC, I never heard any allegations or received any complaints about Jimmy Savile."

Never heard any allegations or received any complaints? Hmm. That's not what Bill Keller, the Times' former executive editor and now a columnist, suggests. "Gossip about Savile's fondling of young teenagers was rife, but never rose to a level deemed newsworthy during his life," Keller wrote in a Sunday column, "Predators on Pedestals."

He also complains that Times-hater Rupert Murdoch is gloating over the scandal, and he stresses that, "So far no evidence has surfaced that Thompson, his successor or anyone else up top had anything to do with dropping the Savile documentary." (The BBC says it is investigating.)" Yet in the same breath, Keller all but concedes that Savile's predatory conduct was well known to many, writing:

The other day The Telegraph published a comment on the affair by a figure whose stature at the BBC matched Savile's. Esther Rantzen was a pioneering consumer reporter and, of particular relevance, the founder of a major child protection charity.

"Everyone knew," she confessed. "That is, everyone in the television and pop music industries knew."

"A journalist friend told me in the 1970s about a little girl with a heart defect. Jimmy had helped her to have the defect surgically corrected. A newspaper heard about his generosity and contacted the girl's family to run the story, but the family refused to talk to them because they were sickened by what they knew he had done to her to make her 'earn' the operation."

Well, it's good to know that Keller is giving Thompson, his future boss, the benefit of the doubt about all this. That said, it will be interesting to see how The Times covers this scandal as it plays out -- and how Bill Keller deals with a nasty case of cognitive dissonance disorder.