Warning: mysqli_free_result() expects parameter 1 to be mysqli_result, bool given in /var/www/html/americanthinker/admin/common/functions/func.general.php on line 126
 The Dictator - American Thinker
« What could possibly go wrong? | Putting Obama on Hold »
|

The Dictator, Directed by Larry Charles

Those familiar with Sacha Baron Cohen's sacrilegious work -- Borat (2006) and Bruno (2009) -- will wonder why this film, "The Dictator," not directed by the comic himself, made gargantuan strides into ... nothingness. Hardly a soul saw it, and reviews arced from tepid to uninterested to quasi dire-warnings. 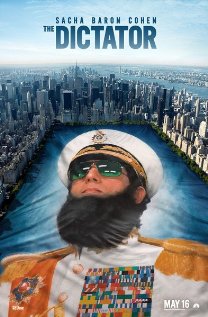 ensure that democracy never gets to the desert country he so happily oppressed.

Though it got hardly a ripple in the critical columns, Sacha Baron Cohen's (vulgar but incessantly ribald) THE DICTATOR goes farther than any popular film (omitting the recent, much-criticized though unseen fraught "Mohammed video" trailer that may have spawned a reactive series of riots -- not) at lambasting the deficits and negatives of life in the Arab Middle East. Naughty, profane, hilarious -- but also prescient, no-holds-barred, and full of delicious ironies, DICTATOR is worth a gander, or a Netflix order, if you have a strong tolerance for some not-so-subtle digs at the foibles of the UN, diplomacy, our tolerance for the insane, and a little uneven but atypical romance, with a sprightly but naive Anna Faris playing the fervid "cute little boy" health crazy the dictator starts to work for in his effort to re-achieve his proper station in life.

If this nails your quirky late-night preference, you are invited to follow the giddy current adventures of a Middle east potentate of a country called Wahdiya who becomes displaced by his body double through a series of deliberate tricks and schemes of his major domo, Uncle Tamir, played elegantly and soberly by Ben Kingsley. As he tries to work his way back into power, and destroy the new Constitution his double will be signing, we follow him into the Waldorf, the new Apple store a block away from this reviewer, Brooklyn Heights, and various tony watering holes of the clouted and privileged.

There are double-over laughs in nearly every scene, a mirage of a fantastic Wahdiya palace shimmering in the desert somewhere (perhaps Spain). Scenes from the months-old film are startlingly current, and especially the scenes in the UN could well have been time-jumped back to the filming of this silly-tickle outing. And made just about the same appeal to rationality and discernment as did the real goings-on in Oyster Bay.

Sacha Baron Cohen is a tough sell, and often goes one or two steps over the line.

He's Woody Allen without a monitor or cautious production team.

If laughing is your game this week, given the fumbles in NFL football, you might aim your remote at The Dictator.