Warning: mysqli_free_result() expects parameter 1 to be mysqli_result, bool given in /var/www/html/americanthinker/admin/common/functions/func.general.php on line 126
 Thanks for clarifying that, CNN - American Thinker
« Questionable Solar Math at the Wall Street Journal | The 2012 Presidential Election Campaign and Decision »
|

Thanks for clarifying that, CNN

A CNN political reporter has taken an active role raising money for the Obama campaign. The cable network, which has in the past claimed to be a neutral ground between Fox on the right and MSNBC ont he left, still employs him. We appreciate the clarification.

The great Noel Sheppard of Newsbusters has the story at that invaluable site:

You can view the donation page he links to here. 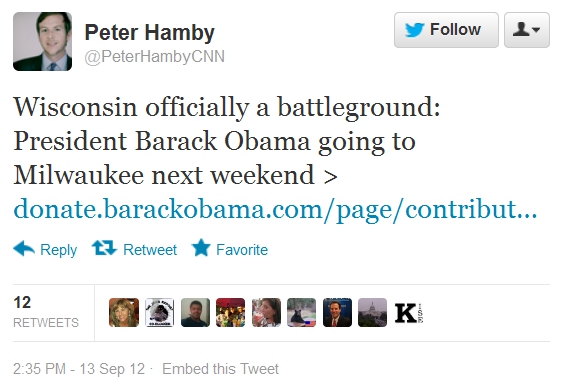 CNN styles itself "the most trusted name in news."  Now, we know that it means trusted to be on Obama's side.

Imagine for a moment that a Fox News reporter had tweeted the fundraising page of Romney to followers. It would be the top story at CBSNBCABCMSNBC and the NYT. Hamby's tweet has been out there for 5 days now.