« Libyan Jihadists' Free hand | To the Shores of Tripoli »
|

The murder of Ambassador Stevens prompts a new question to Obama supporters: "How's that Arab Spring thing workin' out for ya?"

The horrific photo of Chris Stevens, who died in service to his country, is the new icon for Obama's naïve Arab Spring mantra.

"That story of self-determination began six months ago in Tunisia. On December 17, a young vendor named Mohammed Bouazizi was devastated when a police officer confiscated his cart. This was not unique. It is the same kind of humiliation that takes place every day in many parts of the world - the relentless tyranny of governments that deny their citizens dignity. Only this time, something different happened. After local officials refused to hear his complaint, this young man who had never been particularly active in politics went to the headquarters of the provincial government, doused himself in fuel, and lit himself on fire.

Sometimes, in the course of history, the actions of ordinary citizens spark movements for change because they speak to a longing for freedom that has built up for years. In America, think of the defiance of those patriots in Boston who refused to pay taxes to a King, or the dignity of Rosa Parks as she sat courageously in her seat. So it was in Tunisia, as that vendor's act of desperation tapped into the frustration felt throughout the country. Hundreds of protesters took to the streets, then thousands. And in the face of batons and sometimes bullets, they refused to go home - day after day, week after week, until a dictator of more than two decades finally left power.

The story of this Revolution, and the ones that followed, should not have come as a surprise. The nations of the Middle East and North Africa won their independence long ago, but in too many places their people did not. In too many countries, power has been concentrated in the hands of the few. In too many countries, a citizen like that young vendor had nowhere to turn - no honest judiciary to hear his case; no independent media to give him voice; no credible political party to represent his views; no free and fair election where he could choose his leader.

This lack of self determination - the chance to make of your life what you will - has applied to the region's economy as well. Yes, some nations are blessed with wealth in oil and gas, and that has led to pockets of prosperity. But in a global economy based on knowledge and innovation, no development strategy can be based solely upon what comes out of the ground. Nor can people reach their potential when you cannot start a business without paying a bribe.

In the face of these challenges, too many leaders in the region tried to direct their people's grievances elsewhere. The West was blamed as the source of all ills, a half century after the end of colonialism. Antagonism toward Israel became the only acceptable outlet for political expression. Divisions of tribe, ethnicity and religious sect were manipulated as a means of holding on to power, or taking it away from somebody else.

But the events of the past six months show us that strategies of repression and diversion won't work anymore. Satellite television and the Internet provide a window into the wider world - a world of astonishing progress in places like India, Indonesia and Brazil. Cell phones and social networks allow young people to connect and organize like never before. A new generation has emerged. And their voices tell us that change cannot be denied.

In Cairo, we heard the voice of the young mother who said, "It's like I can finally breathe fresh air for the first time."

In Sanaa, we heard the students who chanted, "The night must come to an end."

In Benghazi, we heard the engineer who said, "Our words are free now. It's a feeling you can't explain."

In Damascus, we heard the young man who said, "After the first yelling, the first shout, you feel dignity."

Here's the newest addition to his list of events:  In Tripoli, we see the limp body of a dead American Ambassador. 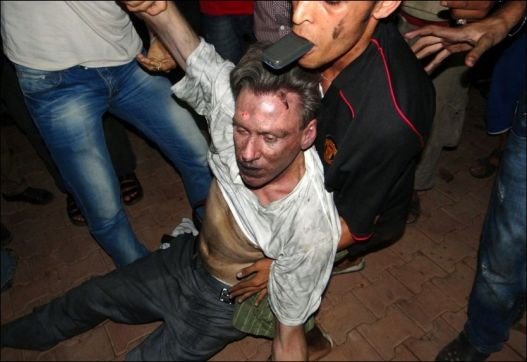 "That's why, two years ago in Cairo, I began to broaden our engagement based upon mutual interests and mutual respect."

When a nation chooses to be governed by incompetent leadership, people die. It's always been that way. It will always be that way. And that's the way it is now, in America.