Warning: mysqli_free_result() expects parameter 1 to be mysqli_result, bool given in /var/www/html/americanthinker/admin/common/functions/func.general.php on line 126
 My name is OBAMANDIAS (updated: karma has struck) - American Thinker
« Elizabeth Warren and the Cab Driver | Farm Bill-Inspired Food Fight »
|

My name is OBAMANDIAS (updated: karma has struck)

Look upon my works and laugh your ass off!

This is not a joke.  Or it at least it isn't meant as one.  It seems sand from Myrtle Beach, South Carolina was shipped to Charlotte, North Carolina to create this 16 foot tall monument for the Democrat National convention. 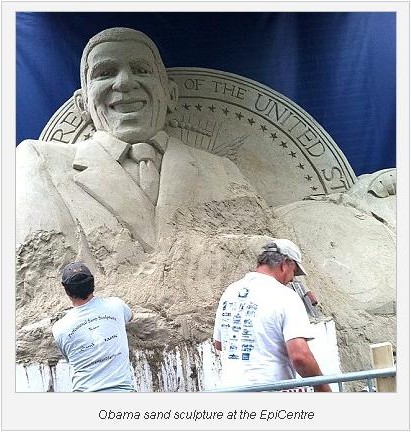 When you build on a foundation of sand....

CHARLOTTE, N.C. - A torrential downpour that struck Charlotte Saturday afternoon damaged the Mount Rushmore-style sand sculpture bust of President Obama - an ominous beginning to what many fear is a plagued convention.

Workers were trying Saturday afternoon to reform the base of the sculpture, built from sand brought in from Myrtle Beach, S.C., pounding and smoothing out the sand that had washed off the facade of the waist-up rendering of the chief executive.

The sand sculpture was protected from above, and Mr. Obama's face didn't see too much damage. But the storm was so strong that its heavy winds blew the rain sideways, pelting the president's right side and leaving the sand pockmarked and completely erasing his right elbow.