NYT bias bleeds through photos of Ryan at RNC

You've got to hand it to the photo editors at the New York Times: they are even better progressive propagandists than the NYT's writers and their editors.  With Paul Ryan hitting it out of the park to anyone who listened, the challenge was to create a mood entirely at variance with the sunny, likable, yet sharp impression Ryan made on the TV audience, not to mention the wildly enthusiastic crowd. But the Times, located in the graphic design capital of America, employs some real pros. They pulled out all the stops.

First, there was this picture of Ryan, in an article on his debate prep:

Damon Winter of the Times took the shot, but the cropping added much to the sinister impression. (We can only present a thumbnail here, but to get the full impact, see the original here).

The crowd, shadowy figures in the background, compressed by the telephoto lens into looming, vaguely threatening entities, sets the mood brilliantly. Then there's the cropping: just a disembodied head of Ryan. Not a bust, including the shoulders, for that would add dignity. The editors chose their frame carefully, too, capturing a moment that could be interpreted as deer-in-the-headlights.

Then there was the front page picture today, with the only possible way to top Winter: Sieg Heil! 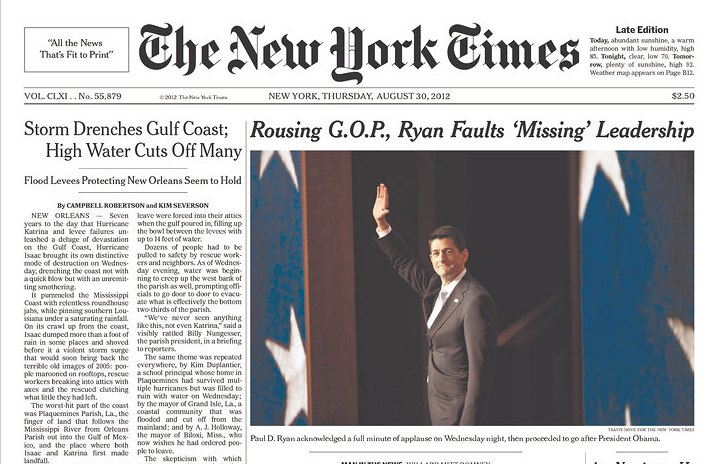 Travis Dove, the photographer, the photo editors, and the front page team have outdone themselves.  Arthur Brisbane has been validated.