Do You Know Frank Marshall Davis?

For the past four years, the media have chosen to keep the public in the dark about Barack Obama's Hawaii mentor, Frank Marshall Davis.  The fact that Davis was a card-carrying member of the Communist Party USA, a published pornographer, and the subject of two-thirds of the poems the young Obama ever wrote (or had written for him) might have something to do with that.

As a public service to their neighbors in the village of Gilmanton Ironworks, New Hampshire, Skip and Cindy Houghton launched a humble educational campaign.  They began by positioning a roughly 6' x 3' signboard outside their home with the message: 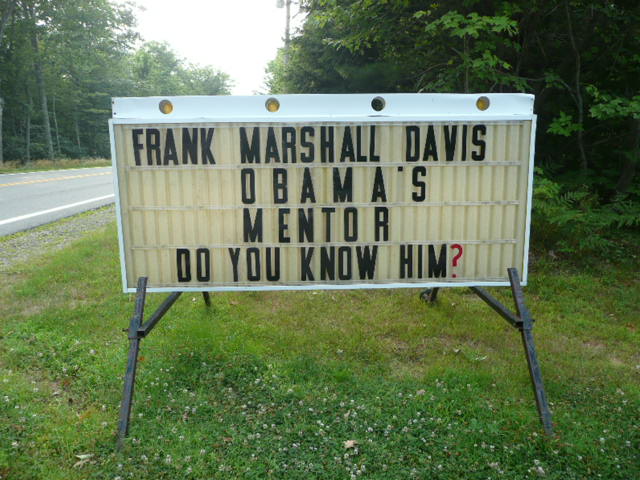 Do You Know Him?

Not many people did.  The Houghtons happily educated those who inquired.  The usual response, says Cindy, was, "Gosh, I didn't know that."

Those who do know Davis recognized kindred spirits in the Houghtons and often stopped to talk.  Billy Baer, attorney and Tea Party activist from New Jersey, was so impressed  he visited the Houghtons for an hour and sent me the photo above.

The Houghtons continue their educational project in this crucial swing state.  Their new sign: "Big government is on the move.  Wake up."  Hard to say it better in ten words or less.