Warning: mysqli_free_result() expects parameter 1 to be mysqli_result, bool given in /var/www/html/americanthinker/admin/common/functions/func.general.php on line 126
 Smart Regulation -- The Chemical Safety Board vs. OSHA - American Thinker
« Happy Anniversary, Tea-Party Hobbits | Which is worse: leaking classified information or destroying it? »
|

Smart Regulation -- The Chemical Safety Board vs. OSHA

The Chemical Safety Board has just released a preliminary report on the Deepwater Horizon accident.  The core finding was that the crew was too focused on reportable lost-time accidents and too unfocused on process safety.  Of course, our president dispatched the attorney general to threaten criminal charges for violations of mindless regulations while his interior secretary promised to keep a "boot on the throat" of BP!

The full title on the report is "CSB Investigation: At the Time of 2010 Gulf Blowout, Transocean, BP, Industry Associations, and Government Offshore Regulators Had Not Effectively Learned Critical Lessons from 2005 BP Refinery Explosion in Implementing Safety Performance Indicators."  Here is a summary of the board's findings:

Noting the lack of sustained focus on process safety, CSB Investigator Cheryl MacKenzie described an "eerie resemblance" (emphasis added) between the 2005 explosion at the BP Texas City refinery and the explosion aboard the Deepwater Horizon.

At the BP Texas City refinery on March 23, 2005, contract workers had just returned to temporary trailers at the plant after attending a celebratory lunch commending an excellent personal injury accident record.  Shortly after lunch, an explosion occurred during process startup, killing 15 and injuring 180 others.  At Macondo, BP and Transocean officials were in the process of lauding operators and workers for a low rate of personal injuries on the very day of that tragedy.  Company VIP's had flown to the rig in part to commend the workforce for zero lost-time incidents.

Investigator MacKenzie said, "The emphasis on personal injury and lost work-time data obscures the bigger picture: that companies need to develop indicators that give them realistic information about their potential for catastrophic accidents. How safety is measured and managed is at the very core of accident prevention. If companies are not measuring safety performance effectively and using those data to continuously improve, they will likely be left in the dark about their safety risks."

It is interesting to note that the Chemical Safety Board is "an independent federal agency charged with investigating serious chemical accidents.  The agency's board members are appointed by the president and confirmed by the Senate.  CSB investigations look into all aspects of chemical accidents, including physical causes such as equipment failure as well as inadequacies in regulations, industry standards, and safety management systems. The Board does not issue citations or fines but does make safety recommendations to plants, industry organizations, labor groups, and regulatory agencies such as OSHA and EPA."

In other words, it is similar in concept to the National Transportation Safety Board (NTSB), while the Bureau of Safety and Environmental Enforcement (BSEE) (the successor to the disgraced Minerals Management Service) is the analog to the Federal Aviation Administration (FAA).  Which has contributed more to the greatly improved safety record of commercial aviation -- the NTSB or the FAA?  What was once a somewhat risky business has recently gone as much as six years without a passenger fatality due to the improvements in safety wrought by NTSB investigations.

1960.2(j). The term incidence rates means the number of injuries and illnesses, or lost workdays, per 100 full-time workers. Rates are calculated as

While most Americans have very limited contact with manufacturing, particularly under administrations focused on replacing "Rust Belt" jobs with service jobs in the "Service Economy," a majority will have seen the opening credits of The Simpsons.  If you want a brief explanation of how this accident could occur, consider the aspects of human nature on display as Homer Simpson reacts to the five-o'clock whistle.  Initially, he is holding a glowing green fuel rod (this is fiction, after all) with tongs while dressed in protective clothing and a mask intended to protect him from radiation.  But when the whistle blows, he drops the tongs and throws off the mask in his rush to the exit.  As he hurries by, he knocks over two fellow employees updating the OSHA-mandated lost-time accident display in the lobby!  On the Deepwater Horizon, the crew was in a hurry to finish the job and go home and did not pay enough attention to the subtle indications that gas was intruding into the well until the well blew out.

Threatening criminal charges against those found to be most responsible -- the supervisory crew in the drilling shack who failed to pick up those indications and shut in the well -- does not have any practical effect, given that they have already been given a death sentence!  A majority of airline accidents have been attributed to "pilot error," so the NTSB was created with the desire to proactively affect the future, rather than futilely try to revise the past.  As both the CSB and the BSEE are starting to admit, improved safety in offshore drilling is more likely to come from private-sector efforts such as the new American Petroleum Institute (API)'s Recommended Practice 754 (RP 754) and the new and improved capping stack, designed and manufactured by the Maine Well Containment Corporation (MWCC) and currently being tested in 7,000 feet of water in the Gulf of Mexico.

Which do you believe will be more effective going forward, Mr. President -- a bunch of wet-behind-the-ears recent Ivy League graduates hired by the chief regulator, Michael Bromwich, or grown men and women "with machines" such as this? 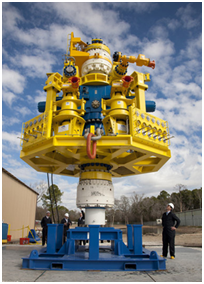 Bruce Thompson maintains a blog and can be reached at MachiasPrivateer@hotmail.com.