Warning: mysqli_free_result() expects parameter 1 to be mysqli_result, bool given in /var/www/html/americanthinker/admin/common/functions/func.general.php on line 126
 Graphics on how the welfare state is out of control - American Thinker
« Is Romney too rich to be president? | Romney drops the 'L-Word' on Obama »
|

Graphics on how the welfare state is out of control

James Pethokoukis at AIE blog has 6 charts that show the welfare state out of control.

We won't reproduce them all here, but Pethokoukis gives a thumbnail sketch of what they show:

The original purpose of Medicaid was to provide improved healthcare access for poor people, while not turning the safety net into a trap. Under President Obama's Affordable Care Act, Medicaid will be greatly exapnded beyond what Congress originally intended.

In fact, as these charts show, it has already expanded beyond what Congress surely originally envisioned and, in the process, has created a terrible fiscal problem for the United States. (These charts and graphics come from a briefing today here at AEI, conducted by Gary Alexander, secretary of public welfare for Pennsylvania.)

- The number of Americans on disability has risen 19% faster than jobs created during this recovery.

- There are just 1.2 private sector workers per 1 person on welfare or working for government.

- There are now just 1.65 employed persons in private sector per 1 person on welfare assistance.

Here's a graph on how Medicaid and other welfare enrollment has exploded: 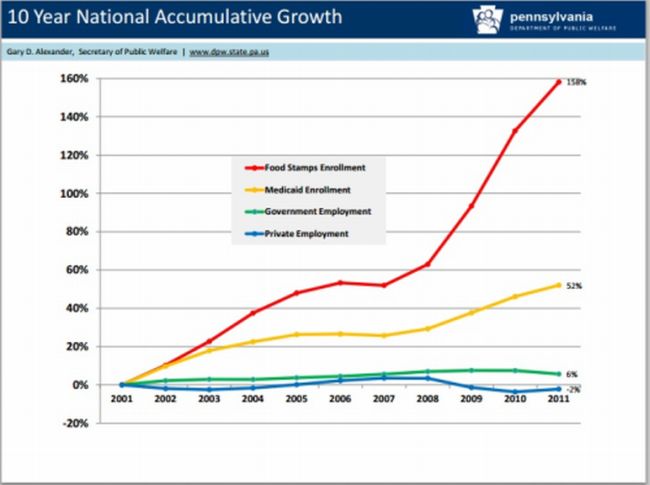 The longer we delay in addressing these problems, the harder they will be to fix. Every year the Democrats tell us that there's nothing to worry about regarding Medicare or Medicaid and use that as an excuse for inaction (while accusing the GOP of wanting to "destroy" health care for seniors and the poor), the more difficult it is going to be to summon the political will to make hard choices.

That's the reality of it. And judgment day is coming sooner than any of us would like to think.