One of Barack Obama's major contributions to American life has been a heightening of racial antagonisms, despite his promise to "bring us together." Perhaps his attorney general's taunt that Americans are "cowards" when it comes to race has encouraged some people to air their personal racial prejudices in public. We have seen open lynch mob behavior tolerated by the Department of Justice, at least when the proposed lynchee is a "white Hispanic" (with emphasis on the white part). 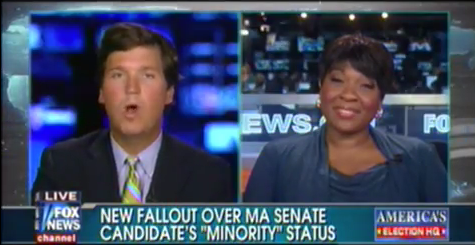 But now, things have come to pass where even highly credentialed members of the race grievance industry feel permission to hurl racial epithets at white people in their professional capacity as media commentators. Consider the remarkable incident yesterday  when Jehmu Greene, a self-proclaimed "social justice" advocate and paid talking head ("Fox News contributor" - which means being on call to appear on air to discuss issues of the moment) called Tucker Carlson a "bow-tying white boy" in the course of a discussion on Megyn Kelly's show. Watch the following video segment, but don't do so with a beverage in your mouth:

Perhaps the most remarkable aspect of the segment is that Ms. Greene forthrightly denied calling Carlson a name. This means either that the epithet does not sound like name-calling to her, or that it slipped out so readily that she didn't even notice. As a ythought experiment, Ms. Greene ought to consider the raction if Mr. Carlson had referred to Louis Farrakhan (the man invariably referred to respectfully as "Minister Farrakhan" by President Obama) as a "bow-tying black boy."

In 2010, Greene joined Fox News Channel as a contributor.

Throughout her career, she has worked with the media to build high-profile social justice campaigns. A commentator on Fox News, CNN, MSNBC and elsewhere, Greene served as the first African-American president of the Rock the Vote organization from 2000-2005 where membership grew from 1,500 to 1 million, 1.4 million new voters were registered, over 200 celebrities volunteered their support and youth voter turnout in the 2004 elections was acheived.[2]

In 2010, Greene was appointed by Secretary of State Hillary Clinton to serve on the U.S. National Commission for UNESCO.[4]

Greene served as an advisor to Hillary Clinton's 2008 presidential campaign.[5]

She was a member of the Citizen's Debate Commission [6] and previously served on the Board of Directors of the American Prospect Magazine; Demos; Youth Vote Coalition; The Entrepreneurial Development Institute (TEDI). She has also served as an Advisory Board Member of the Partnership for Public Service; Campus Green Vote; Vote for America; The White House Project's Vote-Run-Lead Project; and Freedom's Answer. Greene was a co-founder and Board Member of the 2030 Center, an economic and public policy organization for young adults.

Greene served on the Credentials Committee for the 2004 Democratic National Convention in Boston, Massachusetts.[7] After the 2004 elections, Greene was appointed by Terry McAuliffe, DNC Chairman, to serve on the Commission on Presidential Timing and Scheduling.[8] The Commission concluded its work in December 2005 and submitted its report to DNC Chairman, Howard Dean. To address diversity, representation, and participation issues in a meaningful way, the Commission recommended that there be an additional one or two first-tier caucuses inserted between the Iowa caucus and the New Hampshire primary.

Greene is a former National Director of Project Vote.[9]

From 1998-2000 Greene served as the Director of Women's Outreach and Southern Political Director at the Democratic National Committee (DNC). Greene also served as the Program Director for the Center for Policy Alternatives' Youth Voices Project and National Student Voter Education Day, Volunteer Coordinator for the University of Texas at Austin Neighborhood Longhorns Program, and Executive Director of the Texas Young Democrats. In addition, she has worked on numerous campaigns, including Clinton/Gore '96, Harvey Gantt for U.S. Senate, Lloyd Doggett for Congress, Jim Mattox for U.S. Senate, and Ann Richards for Governor.

In 1999, Greene traveled to Botswana and South Africa on behalf of the United States Information Agency (USIA) to encourage young voters to participate in the upcoming elections.

Greene was a founder and Managing Partner of Urban Hang Suite, a party promotion and Internet company that specialized in social networking services for African American professionals in Washington, DC.

Evidently white males do not figure among her objects of compassion and concern.

Will Fox News continue to employ her?