The awful truth is dawning on many Democrats, possibly including Elizabeth Warren herself: her candidacy for "Teddy Kennedy's seat" has turned into a nightmare, raising all sorts of uncomfortable issues for public scrutiny. Even worse, Alinsky's  favorite tool, ridicule, is being deployed to make points that inflict lasting damage on sacred cows of the left like affirmative action and the transcendent wisdom of Harvard Law School progressives.

It is starting to damage the Democratic brand.

You would have to search hard to find anyone who better embodies the liberals' you're-too-stupid-to-make-your-own-decisions  mentality than Elizabeth Warren. She was the brains behind the frighteningly powerful and unaccountable Consumer Financial Protection Bureau, which soon will be arrogating to itself pretty much any power it wants to push around financial institutions, and which doesn't need to get Congress to approve its appropriations, so is immune from constituent anger over its policies. She never got to head her brainchild, so instead decided to take what was rightfully hers: the Democratic nomination for Senate in Massachusetts, temporarily hijacked by a pickup-driving fellow of no particular academic accomplishment.

But now that her use of a claimed identity as Native American has blown up in her face, the long simmering issue of affirmative action, which is wildly unpopular among the actual voters, yet still embraced as gospel by the politically important (to the Democrats) race grievance industry, has come to forefront. Warren's attempts to deny that she sought or received favoritism for her claimed drop of Indian blood are completely implausible, thus offering a legitimate target for ridicule. 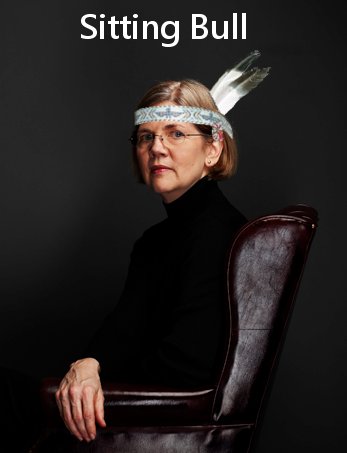 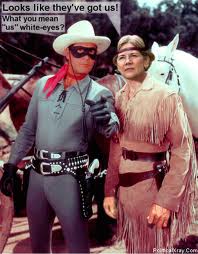 It gets worse. By sheer coincidence, bi-racial identities are quite the topic of late. Our black president had a white mother. And the Emanuel Goldstein of the moment, George Zimmerman, has a Peruvian mother, which makes him as Hispanic as Obama is black, and 16 times more Hispanic than Elizabeth Warren is Native American.

All of which makes the Democrats' devotion to racial identity box-ticking as a means of distributing advantage look rather ridiculous.

When it comes to ridicule, few surpass Mark Steyn. He picks up on the "composite girlfriend" flap to juxtapose what Marxists like to call the internal contradictions of the Democrats' race poltiics.

How does she know she's a Cherokee maiden? Well, she cites her grandfather's "high cheekbones," and says the Indian stuff is part of her family "lore." Which was evidently good enough for Harvard Lore School when they were looking to rack up a few affirmative-action credits. The former Obama special adviser to the Consumer Financial Protection Bureau and former chairperson of the Congressional Oversight Panel now says that "I listed myself in the directory in the hopes that it might mean that I would be invited to a luncheon, a group, something that might happen with people who are like I am," and certainly not for personal career advancement or anything like that. Like everyone else, she was shocked, shocked to discover that, as the Boston Herald reported, "Harvard Law School officials listed Warren as Native American in the '90s, when the school was under fierce fire for their faculty's lack of diversity."

So did the University of Texas, and the University of Pennsylvania. With the impertinent jackanapes of the press querying the bona fides of Harvard Lore School's first Native American female professor, the Warren campaign got to work and eventually turned up a great-great-great-grandmother designated as Cherokee in the online transcription of a marriage application of 1894.

Hallelujah! In the old racist America, we had quadroons and octoroons. But in the new post-racial America, we have - hang on, let me get out my calculator - duoettrigintaroons! Martin Luther King dreamed of a day when men would be judged not on the color of their skin but on the content of their great-great-great-grandmother's wedding-license application. And now it's here! You can read all about it in Elizabeth Warren's memoir of her struggles to come to terms with her racial identity, Dreams from My Great-Great-Great-Grandmother.

So what are the Democrats to do? Professor Warren will not go gently into the dark night. Withdrawing from the race would be an admission that she is a race fraudster.  After all, she has the rest of her academic career to consider. But if she actually gets the nomination, she will almost certainly try to get away from her life story downside, and run as a way for Massachusetts to support President Obama, who remains popular in the deep blue Bay State.

Maybe that will help her, but it certainly won't help Obama, nor will it help other Democrats.

Which leaves the option of the old heave-ho. The party has not yet formally determined its nominee. Professor Warren might not take kindly to a kiss-off, though. Who knows what she might do if treated so cavalierly?  She does not strike me as the sort who takes rejection in a sportsmanlike way.

This is going to be more fun than usually is the case when Republicans run for statewide office in Massachusetts.

Image on left by Rocco, on right by Political X-ray.