Warning: mysqli_free_result() expects parameter 1 to be mysqli_result, bool given in /var/www/html/americanthinker/admin/common/functions/func.general.php on line 126
 An undergraduate takes-down Paul Krugman - American Thinker
« 'The Temple Mount is in our hands!' | Three NATO protestors held in terror plot »
|

Paul Krugman gave up being an honest economist a long time ago - shortly after he learned that the cool crowd gave him more attention when he conjured up economic-like arguments to support the left's irrational view of the world.

His most recent piece of propaganda claims that increased national debt causes economic growth.  He supports his claim by looking at 5 countries and showing that the countries with higher debt levels grew faster over the last 3 months.  Thousands of Krugman zombies must have been elated to finally see hard evidence that the 1% aren't any smarter or harder working: All you have to do is take on a lot of credit card debt.

But an economic Jedi -- an undergraduate from the University of Illinois -- uncovered the subtle flaw in Krugman's logic: The earth has more than 5 countries, and the world wasn't created 3 months ago.  The student used a graph posted on his Facebook page to show that if you look at the 21 largest countries over the past year, you see a strong, clear relationship: Economies with higher debt grow less.  (By the way, the IMF agrees with the undergrad.) 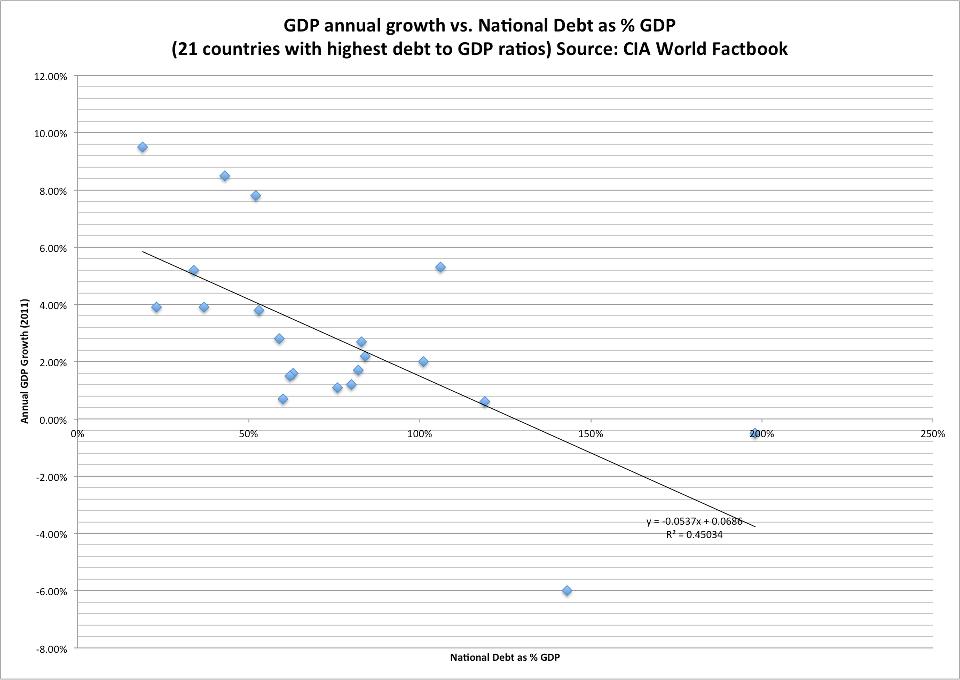 Krugman's analysis does offer one important value: It's an excellent example of what statisticians refer to as "strangling the data" to get it to say whatever the left wants to hear.

James Eaves is a Professor of Management at Laval University and blogs at JellyFields.com