Tensions are simmering between liberal and conservative students at the University of Texas, Austin. At issue is a politically incorrect editorial cartoon in the student newspaper, The Daily Texan, lampooning the media's coverage of the Trayvon Martin case.

Student Stephanie Eisner, a sophomore, used to be a cartoonist at the newspaper, but she was fired for having drawn the cartoon. Her ouster followed protests from outraged liberal students, many of them blacks and Hispanics, who accused editorial board members of being racists for having allowed the cartoon. The Daily Texan subsequently pulled the cartoon, titled "The Media," from its website and it apologized profusely for publishing it.

Now, Eisner and conservative students are fighting back by circulating a petition: It demands that Eisner get her job back.

Her cartoon depicts a woman reading a children's book to a shocked little girl. The book's title: "Trevyon Martin and The Case of Yellow Journalism."

In a corner of the cartoon is an excerpt from the book: "AND THEN the BIG BAD WHITE man killed the handsome, sweet, innocent COLORED BOY." Big arrows point to the words "white" and "colored," which also are boldly underlined -- reflecting the media's breathless bad white/good black storyline.

Eisner, a scholarship student who grew up near Houston, explained: "I feel the news should be unbiased. And in the retelling of this particular event, I felt that that was not the case. My story compared this situation to yellow journalism in the past, where aspects of news stories were blown out of proportion with the intention of selling papers and enticing emotions."

In its apology, on the other hand, The Daily Texan noted that Eisner had been fired, and it explained that "the decision to run the cartoon showed a failure in judgment on the part of the editorial board. We have engaged in meaningful dialogue with many people who shared their concerns and outrage with us." 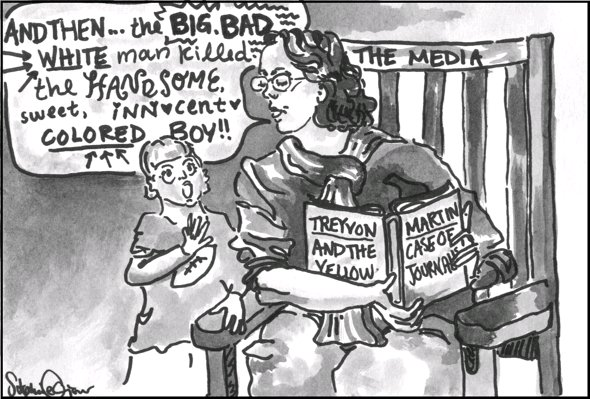 Yesterday, in The Story Unravels: New Questions about Trayvon Martin's Final Hour, Jeff Lipkes used the same fairy tale metaphor to describe the media's spinning of a narrative congenial to their political goal of racial grievance.