Warning: mysqli_free_result() expects parameter 1 to be mysqli_result, bool given in /var/www/html/americanthinker/admin/common/functions/func.general.php on line 126
 Throw Bo a Bone In 2012 - American Thinker
« 'Out of the dark and into the light' - Thanks, Barry | Top 3 candidates disqualified in Egyptian presidential contest »
|

This April is the third anniversary of the Obama's playful pup being adopted by the first family. Who can forget when, as a reward for his winning the 2008 election, a little Portuguese water dog became a post-inaugural gift from the new President, via the Kennedys, to his daughters?

Unlike Seamus Romney who, in the past, on long trips was relegated to a dog crate on the roof of the family car, Bo is so highly esteemed as an Obama family member that, together with the President's staffers, he travels in style on a private jet.

Late last year, in the midst of a "What does $40 mean to you?" campaign, after the wife and kids started their vacation in Hawaii without him, Barack Obama took best friend Bo to PetSmart on a middle-class chew-toy excursion. At more than $10 for a 24" Bully Stick, for 40 bucks poor Bo couldn't even get four beefy chews. Which means that in the world of doggy treats, $40 doesn't go a very long way.

Nonetheless, this year, ever the creative pet owner, President Obama has come up with a way to not only get cyber-chew toys thrown in Bo's "tail wagging" direction, but to also ensure that Bo 'Diddley' can keep on fertilizing the White House lawn.

Therefore, on Bo's behalf, the Obama-Biden website has launched a new effort that begs for bones for Bo, saying, "Now, he's got three years under his collar as the first dog. This April, wish Bo Obama a happy anniversary as a member of the first family. 'Throw Bo A Bone On His Anniversary.'" 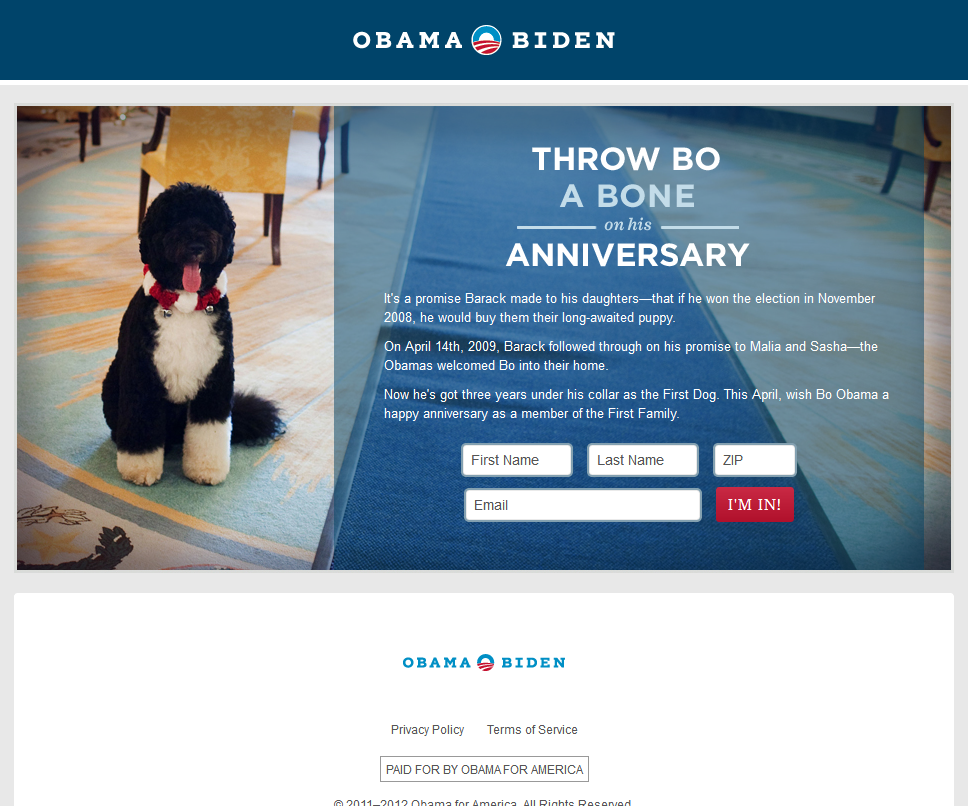 To counter that request, maybe the Republicans could introduce a singsong-y slogan that says "Throw America a Bone - find Bo and his family a new home!"

Either way, at double the price of a Dinner with Obama $5 raffle ticket, the idea is for dog-loving Democrats to contribute $10 to Obama 2012. Trained Americans hoping for another four years of being led around on a leash by Barack Obama have a unique opportunity to throw Bo one bone for each year. If they do, dollars to dog bones, even Obama will approve of how they've spent their "What does $40 mean to you?" money.

Totally aghast, Claire McLean of the Presidential Pets Museum feels that using a dog to raise money is "very crass."  But then again, so is a Secretary of State swilling beer and whooping it up in a Colombian dance club, or a Secret Service detail getting caught pulling their proverbial pants up, or the President sitting on a panel with the presidents of Colombia and Brazil, announcing that he's there to "scout out" potential vacation spots for his wife.

As far as 'throwing the dog a bone' for a sawbuck goes, McLean maintains that "That's like raffling the dog or auctioning the pet," which may even be worse than raffling yourself off for a dinner with strangers in a neighborhood bistro.

Ms. McLean argued that it's not "presidential" to sell $10 dog bones for cash and that the gimmick sullies the dog's pristine bipartisan reputation. Claire maintains that thus far Bo has been free of "real political affiliation." However, soliciting bone donations morphs a non-political pooch into a canine version of the intellectually challenged Democrat ass/donkey, or the higher-thinking Republican pachyderm/elephant mascot.

Nonetheless, tacky or not, even Claire McLean agrees that Bo begging for bones has the potential to raise a truckload of money for the Obama 2012 campaign and, although not he's officially involved in the effort, it smacks of the kind of idea a resourceful Bill Clinton, when not in the doghouse, could have easily come up with.