Warning: mysqli_free_result() expects parameter 1 to be mysqli_result, bool given in /var/www/html/americanthinker/admin/common/functions/func.general.php on line 126
 Romney Rising - American Thinker
« Is the austerity consensus falling apart in Europe? | ObamaCare and Freedom »
|

Last night in Manchester, NH, Mitt Romney gave his best speech of the campaign in the wake of sweeping the five primaries held Tuesday. Clearly, some sort of mental and strategic switch has been thrown, and Romney emerged as a formidable challenger willing to take the fight directly to President Obama. Toby Harnden of the UK Daily Mail called it a "pivot" for Mitt, and the term fits well. Mitt looked poised, self-assured, and focused.

The speech contained at least one very memorable line, one that took James Carville's slogan from Bill Clinton's campaign and deftly fashioned it into a telling blow against Obama. 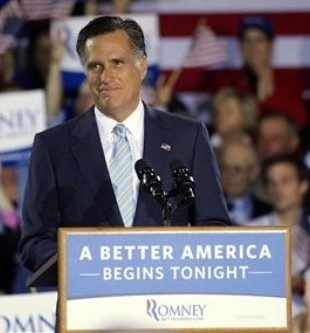 Predicting "a campaign of diversions, distractions, and distortions" from Obama over the next six months, he warned his opponent: "That kind of campaign may have worked at another place over in a different time. But not here and not now. It's still about the economy...and we're not stupid."

So far, Obama's campaign has been shameful in its reliance on voter stupidity and ignorance in its appeals. Resentment against the rich is not an elevating campaign theme. Stoking racial animosity does not make for a better America. Claiming that higher taxes will spark a boom defies both history and common sense. Responding to the lowest possible common denominator strategy with "we're not stupid" is a powerful rejoinder.

Romney appealed to our better angels:

"Tonight is the start of a new campaign to unite every American who knows in their heart that we can do better.  The last few years have been the best that Barack Obama can do, but it's not the best that America can do.

Mitt also played off audience response to his questions about whether we are better off now than before Obama's presidency, modeling a mental process that voters themselves must gop through in deciding whom to support. It was very effective.

Romney is starting to look like a winner, more like Clark Kent without the glasses, a man with untold strengths hidden beneath the pleasant demeanor, than Ward Cleaver. Video of Romney's speech here: