Move over, Etch-a-Sketch! The Obama campaign accidentally handed its opponents a huge present, if they have the wit and the guts to use it.

The portion of the public that is paying attention is justifiably alarmed at Obama's overheard promise to Putin have "flexibility" on missile defense after the election. A serious doubt about Obama -- that unshackled by a future election he will reward his friends and punish his enemies with abandon  -- is out there as a meme.  Right now, it is mostly confined to the conservative blogosphere, but plenty of people who voted for Obama in 2008 are disconcerted by some of his actions and results, on energy, the economy, the Arab Spring, Israel, Russia, the Saudi king bow...the list goes on and on.  Seeds of doubt have been planted. As more people start paying attention, the idea will spread.

Right now, President Obama's attitudes about race are a matter of some concern to Americans, his comment on Trayvon Martin raising troubling issues in a case that is being tried in public before a potential jury is empanelled.  Eric Holder's troubling statements about "my people" add to the worry that an element of racial vengeance may be lurking in the heart of the Obama administration.

In this context, as Obama desperately tries to change the subject away from race -- to the extent of attacking the Supreme Court -- the campaign really stepped in it. Neil Munro of the Daily Caller: 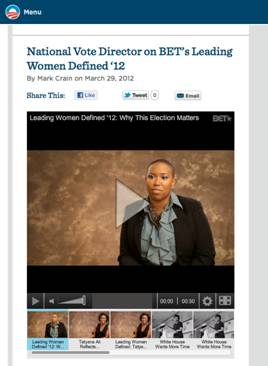 ers, following reporting by The Daily Caller and the Fox News Channel.

In one video that the campaign yanked from the "African-Americans for Obama" section of its website Tuesday, actress Tatyana Ali seemed to predict that a second Obama term would bring a host of benefits to African-Americans once the president no longer had to concern himself with campaigning.

"What really excites me ... is that a U.S. president has only two terms," a laughing Ali said in the footage that the Obama campaign scrubbed from its website Tuesday. "In the second term, 'it's on,' because we don't have to worry about re-election."

"In the second term, it's on." That is a clip at least as powerful as the visual of an Etch-a-Sketch.

To be sure, the race card will be played against the use of this clip (it is still available on the BET site, according to Munro) by Obama opponents. But the Obama campaign endorsed it by putting it on its website, and it was produced by BET, whose managers contribute substantially to Democrats and Obama. It is not racist to notice what they do.

Needless to say, the Romney campaign will not touch it with a ten foot pole.   But that does not constrain a super-PAC.  Such material can be produced and brought to the awareness of a significant portion of the persuadable electorate. There are enough people who adamantly want Obama out of office -- no matter what they think of Romney -- to contribute to a super-PAC willing to go after Obama hammer and tongs.

In the campaign, too, it's on.