Warning: mysqli_free_result() expects parameter 1 to be mysqli_result, bool given in /var/www/html/americanthinker/admin/common/functions/func.general.php on line 126
 Guess who flunks the diversity test? - American Thinker
« Hillary's Plan B | Special Prosecutor will not present Martin case to grand jury »
|

Guess who flunks the diversity test?

Below is a picture of the staff at Obama's Chicago Campaign Headquarters from the Washington Free Beacon. Funny how this overwhelmingly white staff has escaped media comment. I guess it doesn't fit the narrative.  Ace at Ace of Spades quipped that John Derbyshire told his kids that it would be okay to work there.  He added this comment

As well they should be. They look just like Ben Smith's prep school's AV team. 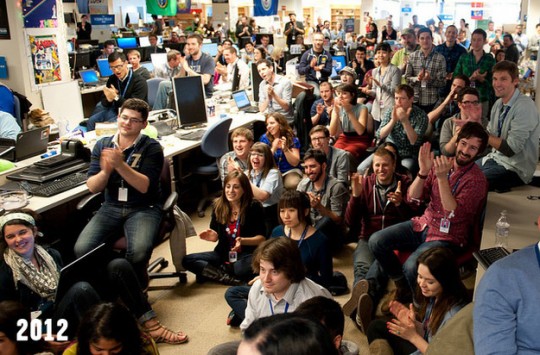