Worse than the Depression

You hear it said that this is the worst US economy since the Great Depression.  I went back to the history books to look up the numbers.  It turns out that the current doldrums are actually worse in an important sense: sustainable 3.5% GDP growth is taking far longer to achieve than it did in the 1930s.

By joining together yearly growth rates into rolling three-year periods of growth, to reflect the time businesses need to invest, and consumers need to feel confident about spending, the trend line is smoothed and the comparison of the New Normal with the Depression is easier to see.

The graph below shows the trend line, but first some discussion.  The 3-year period ending with 1932 experienced -9.4% GDP growth rate per annum, far more devastating than the worse 3-year period of the past decade.  The next two periods, ending in 1933 and 1934, were better than 1932 but still terrible.  But starting in the 1933-35 period, the economy grew at very high, sustained levels for 10 years.  In other words, only five years after the October 1929 crash and the policies that immediately followed, a sustained growth occurred -- for an entire decade, through the end of WWII. 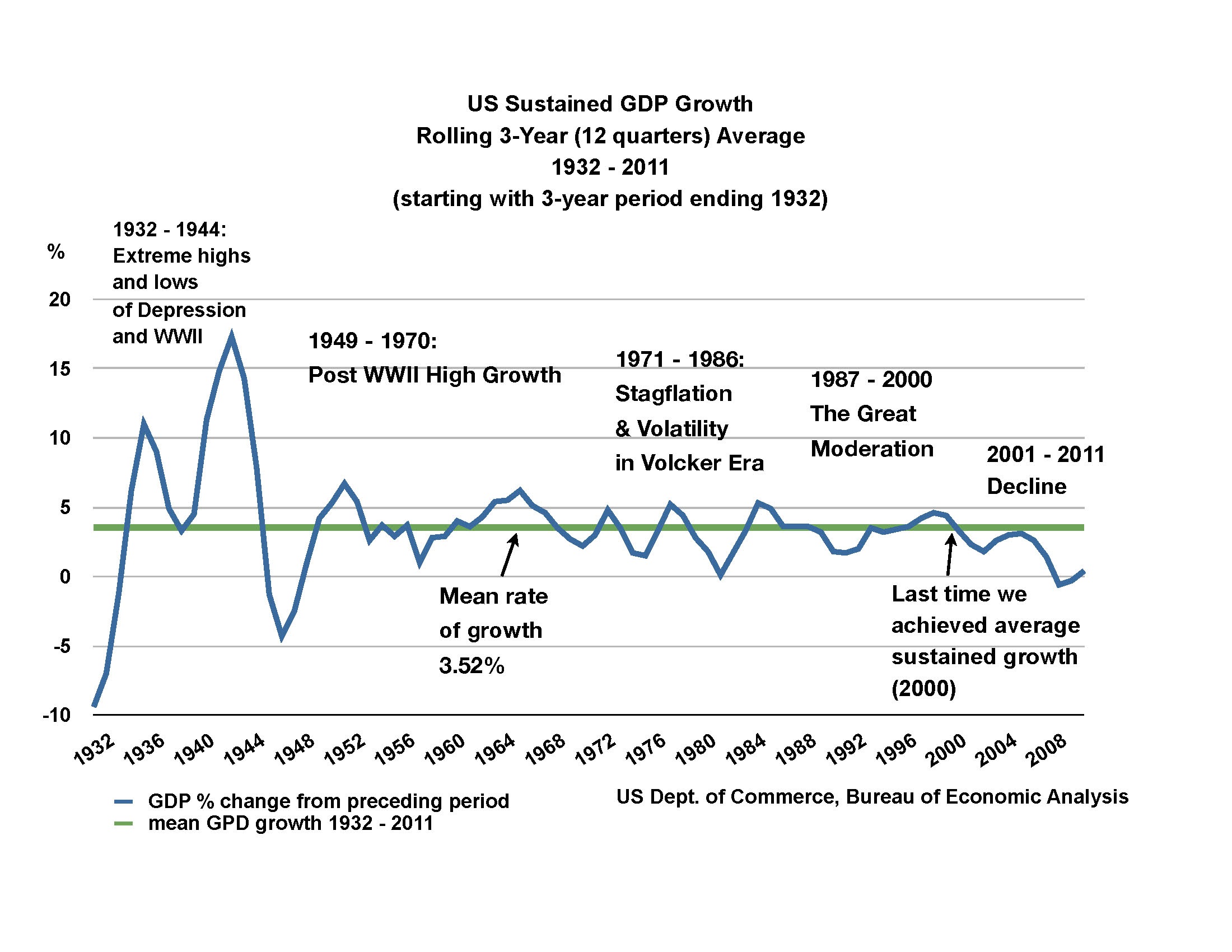 Contrast that with today.  We have not achieved average or above average 3-year sustained growth since "American Beauty" won Best Picture in 2000.

The economic performance of the decade just ended was little better than the Depression.  GDP grew at 1.32% for the 10 years starting January 1930.  The decade ending December 2011 grew at a 1.64% rate.  These similar per annum growth rates mask many fundamental differences between the two periods, in particular the catastrophically low economic output in the first few years of the Depression, but the close comparison of these low growth rates does underscore the seriousness of our current protracted case of an economy with chronically iron-poor blood.

The forecasting community is in agreement that the US will not compensate for this lost decade with sustained 5% growth over the next decade.  The IMF, for example, sees growth of less than 2% for the next two years.  The White House Council of Economic Advisers sees an average of 3.2% over the next decade.  The Philly Fed's Survey of Professional Forecasters sees 2.6%.   These are paltry predictions.  To compensate for the gap between the past 10 years' actual performance and the 80-year mean growth rate of 3.5%, the coming decade should deliver growth at a 5.3% clip.  The general acceptance of sub-par growth is an under-reported story that will have serious consequences.

There is recognition that "the New Normal" properly characterizes today's era, meaning we are bending the mean down in the aftermath of Lehman 2008 while our markets supposedly embark on a semi-permanent deleveraging process.  This strikes me as too anodyne a term to describe a decade-long period of slow growth and near-zero interest rate on savings accounts.  Bill Gross of PIMCO is asking investors to consider using the metaphor Paranormal, in reference to a universe in which no amount of liquidity makes lenders want to lend, and no one can afford to save.

Despite the tripling of the Fed's balance sheet to $3 trillion, zero rates since late 2008, and four straight years of spending $1 trillion more than the federal government earns, the best we can forecast for the next decade is average growth.  This problem of stimulus coupled with anemic performance may be with us for a very long time.