Warning: mysqli_free_result() expects parameter 1 to be mysqli_result, bool given in /var/www/html/americanthinker/admin/common/functions/func.general.php on line 126
 Obama Talks about Standing Up While Sitting Down - American Thinker
« What servicing our debt has really cost us | Top Level USDA Reps Showing Up in US Lunchrooms »
|

Obama Talks about Standing Up While Sitting Down

Obama 2012 has a new campaign ad and it's pulling out all the stops.  President Obama, First Lady Michelle and their two adorable daughters Sasha and Malia are pictured in what is being touted as the first family's holiday portrait.

In the photo, on the left Malia and Michelle are sitting with their perfectly-coifed heads tilting toward each other, smiling brightly. On the right side of the photo little Sasha is perched upon Dad's knee, head tilted in toward his, hands clasped together in obvious father/daughter affection.

The backdrop is a lovely shade of traditional Barack Obama blue. Covering the first family at chest height is a grey-tone banner soliciting support in an election year. 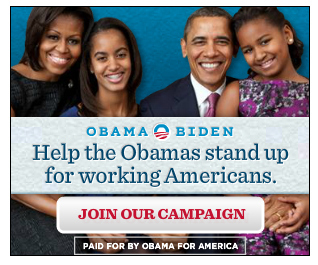 On the first line, although Joe isn't pictured in the photo, is an Obama logo positioned between the embossed names: "Obama Biden."

On the next line is written, "Help the Obamas stand up for working Americans."

Then comes "Join our campaign," followed by "Paid for by Obama for America."

Besides having the previously off-limits Malia and Sasha in the photo, a few things about the ad are striking.

First of all, it appears an attempt is being made to soften up America's opinion of Obama.  In order to help the nation forget the dismal disaster of Barack Obama's presidency thus far, the photo focuses on Daddy Barack: devoted, warm family man and loving father.

If winning is the goal, a more effective slogan would have been: "Who in America wants to be responsible for causing this poor family to endure having an unemployed Dad after January 2013?"

It's also a bit awkward to think that Mr. and Mrs. Obama would include their daughters in an effort to encourage America to help the Obamas (which Obamas do they mean?) "Stand up for working Americans."

This is a family, by and large, that doesn't work in any traditional sense.  So having a perpetually vacationing family 'stand' for perpetually unemployed -- or endlessly working -- families just doesn't jibe.  Moreover, in the picture on his ad about 'standing,' ironically, the President is sitting, which is the crux of the problem with Obama to begin with:  he's always doing the opposite of what he says he's going to do.

The plea to the nation -- many of whom are already 'standing' in unemployment lines -- is to help the Obamas stand. Shouldn't it be the other way around?  And what's up with that, anyway?  America used to be about people standing on their own.

That right there -- sitting down while talking about standing up, sending a message that in America we must depend on others for help to do the simplest things -- sums up the destructive nature of the last four years.

And so the Obama campaign creates an ad that's lovely to look at, with a logo and a catchy motto featuring the smiling Obama family, but what Obama 2012 fails to realize is that the ad also sends a message that they probably never intended.

Therefore, let's hope the Obamas keep right on sitting, but do it somewhere besides the White House; maybe then all Americans can finally move forward by standing up for themselves.