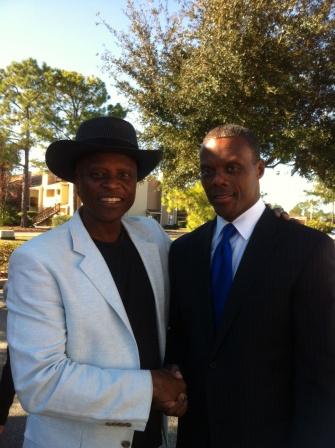 Well, here we go again. Tea Party Express called me 10pm Thursday to hit the road Friday at 2:30pm to begin a four day tour of Florida. Fellow team member and patriot, conservative radio talk show host, Andrea Shea King picked me up at a gas station off of I-95 to rendezvous with the Tea Party Express tour bus in Jacksonville. This life is too glamorous for words.

Our Jacksonville rally hosted by First Coast Party featured former Congressman, J.C. Watts. I did not know he was a Baptist minister until I heard his wonderful compelling speech today. Before he spoke, I met and chatted with Congressman Watts on the Tea Party Express bus. I complemented him for standing firm when he was attacked for being a black Republican on the Chris Rock TV show. Congressman Watts said he refuses to fit into a suit someone else has prepared for him, nor will he succumb to group think. I was impressed. J.C. Watts is a great man of character.

Team members were moved by the passion of the Sciolaro family who drove from Kansas to attend our rally. They traveled to primaries volunteering for Rick Perry and were heartbroken when Perry dropped out. As per Perry's instructions, they have rallied around Newt.

The eldest daughter of the Sciolaro family was so frustrated with her college professors, she changed her major to Political Science. Mom, Vicki Sciolaro said she woke up this morning so discouraged about our country that she cried. But, she prayed and God gave her courage to push forward. Folks, the Sciolaro family are great patriots - passionate in their love for America and their commitment to save her. They ARE the tea party.

So, that is it for now. I am on the bus headed to Winter Park, FL for our second of three rallies today. No time to stop for lunch - guess I will microwave a hot packet; not a big fan of hot pockets.

Chairman of The Campaign to Defeat Barack Obama. Lloyd is singer/songwriter of the American Tea Party Anthem and author of Confessions of a Black Conservative, foreword by Michele Malkin. Spokesperson for Tea Party Express.  Please help me spread my message by joining my Liberty Network.  LloydMarcus.com