Warning: mysqli_free_result() expects parameter 1 to be mysqli_result, bool given in /var/www/html/americanthinker/admin/common/functions/func.general.php on line 126
 Graph for the Day for January 31, 2012 - American Thinker
« US citizens banned from leaving Egypt staying at US embassy | Romney confident of Florida victory »
|

"More than half of Americans mistakenly believe that federal workers are overpaid, and a third also wrongly think they are underqualified, according to a recent Washington Post poll. The truth is federal workers earn 22 percent less than their counterparts in the private sector, according to the U.S. Office of Personnel Management." Center for American Progress, 25 October 2010.

"Overall, the federal government paid 16 percent more in total compensation than it would have if average compensation had been comparable with that in the private sector, after accounting for certain observable characteristics of workers." Congressional Budget Office, January 2012.

Comparing the Compensation of Federal and Private-Sector Employees 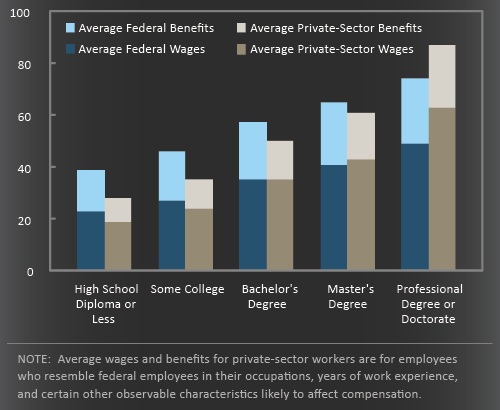 Percentage difference in average benefits between federal and private sectors:

All levels of education: 48%