According to the BLS, prices are dropping, including such areas as food and fuel.  Funny, I haven't noticed anything close to a price drop at the grocer or the pump.  Regardless, taking this data at face value, it likely reflects a shrinking demand for good and services because of an economic slowdown.

Also, it simply belies the issue with the increase in money stock that has built up over the last several years.

Both M1 and M2- basic measures of the amount of money in circulation, have increased very significantly in the last year. Unadjusted:

I hope the reader is paying attention here.  A 32% increase in the money supply is very large.  The only thing keeping us from roaring inflation is that the velocity of money is so low right now.  Money is not turning and churning through the economy quickly, but once it does, all this extra money pumped out into the marketplace will impact inflation in a major way. 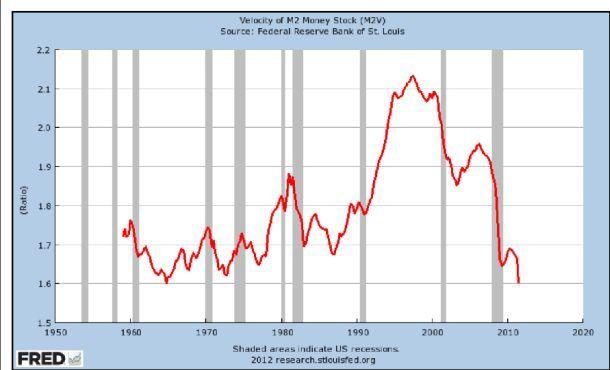 Finally of note is this gem in the report:

PPI Weights to be Updated

All PPIs will be affected by this weight update, including all the industry net output indexes, as well as indexes for traditional commodity groupings. In addition, weights will be updated from the 2002 to the 2007 census for all stage-of-processing indexes, durability of product indexes, and special commodity-grouping indexes. This weight revision will not change any arithmetic reference bases for indexes, the dates when PPIs were set to 100.

The basic structures of the PPI commodity and stage-of-processing classification systems will not change as a result of the weight revision. The PPIs classified according to the North American Industry Classification System (NAICS), however, will be updated in February 2012 with the release of January 2012 index data to reflect 2012 NAICS definitions established by the U.S. Census Bureau. The weight update will also result in significant shifts in the relative importance of various industries and products. These shifts will impact aggregate indexes in a manner commensurate with the relative gains and losses in value weights from 2002 to 2007.

What can this mean?  I am guessing that in the most simple terms the BLS is coming up with a new evaluation parameter which will, for practical purposes, bury inflation and price increases even further into the fabric of their reporting.  Given the mountain of money that has been created in the last year, the BLS will need this tool to keep the reported or official inflation rate, within acceptable political limits.