American Taxpayers getting off easy

American Taxpayers getting off easy.

"As the GOP presidential candidates rally around the battle cry of the need to cut Americans' taxes, there's fresh evidence of just how heavy that tax burden is. Compared to the rest of the developed world, though, U.S. taxpayers have it pretty easy. "

Well we can't argue with this graph can we? Compared to all those other countries, we've sure got it easy sitting down there third to the bottom. 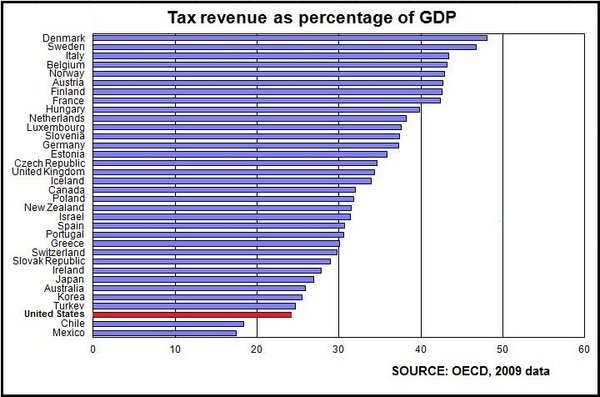 Spain, Portugal, Italy, Ireland and Greece jump off at me. In spite of all their taxes they're bankrupt. Maybe they're not paying enough taxes?

Not mentioned in the article is the fact that while taxpayers in the U.S. pay ONLY 24.1% of GDP in taxes the historical average has been closer to 18% and 24.1% is the highest rate since WWII. That's not important enough to bring up.

Also not mentioned in the article or included in the graph are sales taxes and state and local income taxes which, were they included, would easily move the U.S. up 10 or 15 spots. Many of the other countries have Value Added Taxes (VAT) which are included in the numbers and it's unlikely that any of the other countries have significant state or local taxes. Not to mention property taxes, franchise taxes, licensing fees, personal property taxes, inventory taxes, hotel taxes, registration fees, etc.

Most of the countries on the list have socialized medicine. The vast majority of U.S. taxpayers are responsible for their own health care either paid personally or through employers. The cost of this 16% to 17% of the economy is born by the private sector and not paid through taxes. If we paid it to the government as taxes instead of in the free market it would raise the U.S. tax rate up almost to the top.

Now add regulatory burdens placed on businesses and what do you know, we top the list without a close competitor.

Suddenly I don't feel like I have it so easy.