The "greatest generation" won the Second World War and on returning home built America into a super power -- a beacon of freedom. Now those Americans are in their 80s and 90s.

One of them is former Navajo "code talker" Chester Nez -- the subject of a recent article in The Albuquerque Journal, "The Last Code Talker." Now 90 years old, Nez is "the last living member of the U.S. Marine Corps 382nd Platoon, comprised of 29 Navajos who developed a secret code the Japanese were never able to decipher," noted the Journal.

Some 430 bilingual Navajo Americans (fluent in English and their native Navajo) played crucial roles in sending coded tactical messages in their Navajo language during the horrific island-hopping campaigns in the Pacific.

Among the former code talkers' dwindling ranks, there are no cynical post-modernists -- even though Nez, as the Journal explained, had a traditional Navajo boyhood -- attending Indian boarding schools where "the children were forced to speak English and were punished when they were caught talking their native Navajo. It was part of the federal government's efforts to acculturate Native Americans."

It's the Journal, not Nez, which dwells on that, however.

Nez prefers to talk proudly about his military service and, in particular, a Congressional Gold Medal he received: "one of only 29 in existence -- given to Nez by then-President George W. Bush during a White House ceremony July 26, 2001," noted the Journal.

Five of the "original 29" Navajo Code Talkers, the men who developed and implemented the code that confounded the Japanese during World War II and was never broken, received the medals that day.

In a moment that speaks to the reverence Nez holds for his country, instead of shaking the president's hand after being handed the medal, he saluted Bush as his commander-in-chief.

When the ceremony took place, five of the "original 29" were living. Today, only Nez remains.

"I always think about those guys I served with. I try to remember what I did with those guys and how we fought together," Nez, nearly deaf and reliant on a wheelchair since losing the lower portion of both legs to diabetes, said in an interview. "It made me very sorry when I would hear that they had passed."

In America's Southwest, the Navajo code talkers are heroes. They're proud of their military service as reflected in this YouTube clip in which a former code talker, during a school oral history fair, sings the Marine Corps anthem in English -- and Navajo.

And funerals for former code talkers get prominent news coverage, as reflected in this television news report from Farmington, New Mexico -- a funeral at which pride in America, the Marine Corps, and Navajo heritage are simultaneously celebrated.

This YouTube clip -- "The Navajo Code Talkers, Our Heroes" -- was shown in the Arizona House of Representatives during the dedication of a Navajo Code Talker Monument on Feb 28, 2008. Much of the nearly 10-minute clip includes a voice-over of President Bush honoring Chester Nez and other Navajo code talkers with Congressional Gold Medals. 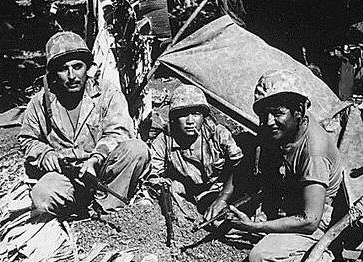 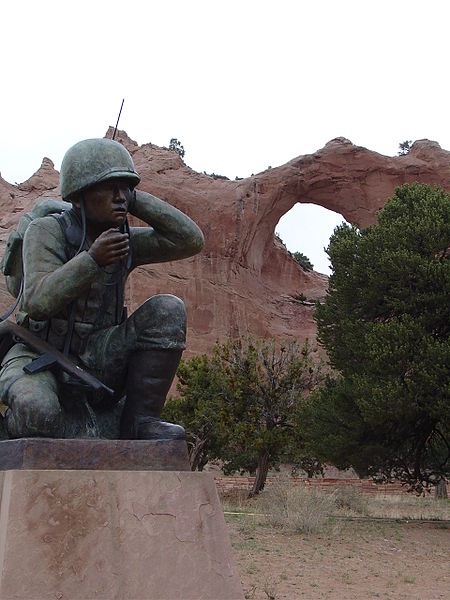