Warning: mysqli_free_result() expects parameter 1 to be mysqli_result, bool given in /var/www/html/americanthinker/admin/common/functions/func.general.php on line 126
 Global Warming Bubble is Popping - American Thinker
« Egypt goes to the polls as protests continue | For Gov. Abercrombie it's all about the kids bureaucrats »
|

Remember that old Market Crash of 2008? It started very slowly when some investors got suspicious about empty mortgages (wonder why?) wrapped in layers and layers of tin foil, then told some others about their doubts, and more and more and then BANG! Markets panicked, John McCain lost, Obama won on sheer unmitigated gall and nothing more.

In math-physics this is called a "phase change, "and it doesn't just happen with water molecules locking together to make ice crystals and acres of Lake Michigan all going Crack! when the water temps drop below zero C. It also applies to avalanches, demand-and-supply markets (including political ones), and scientific "consensus" based on dubious evidence.

The 5,000 internal emails among "scientists" in the UK -- Climategate 2.0 -- are proving to be the tipping point. This story is now moving at warp speed.

In the UK the Prime Minister's office has just run up the white flag of surrender.

The BBC Organ of Propaganda is now a target of the British press, who seem to remember what news coverage is for. See here.

Excellent blow-by-blow coverage is being provided by Climate Depot.

The UK Daily Mail has actually been doing real journalism -- a disappearing commodity in Crony Socialism. 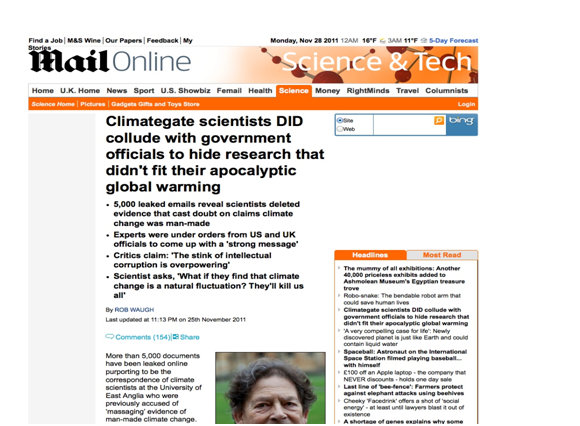 If you like your facts raw, here's Anthony Watt's site, "Wattsupwiththat?"

You are watching history in the making.

4:30PM PST 11/27 BOMBSHELL An absolutely disgusting string of communications that shows the tribal attempt at getting an editor of a journal fired on made up issues - all because he allowed a publication that didn't agree with "the Team". This is ugly, disturbing, and wrong on every level.

11AM PST 11/24 Am unsurprising admission from a BBC environmental reporter to Dr. Phil Jones that they really have no impartiality at all (ho ho) when it comes to climate issues.

Apparently Mann went "a little crazy" over a paper showing the MWP exists.

9:45 AM PST 11/27 Newsbytes. Major crack in the warming wall at the UK prime minister's office. BBC in collusion with Climategate scientists.

9AM PST 11/27 The saga of the missing station data at CRU and the "pants on fire" defense of it as told by Willis Eschenbach. Dr. Phil Jones is between a rock and a hard place, quite.

1:30PM PST 11/26 An email shows the UNFCCC considers activists an essential tool saying "...organized and deeply committed environmental activism has long been an important part of the UNFCCC process..."

2:50 PM 11/25 Two separate examples show obstruction and collusion by members of "The Team" to prevent any dissenting science from being properly considered by the NRC in 2007.

9AM PST 11/25 via bishop-hill, strange infighting:

It's a slightly late Thanksgiving present to the world.