Warning: mysqli_free_result() expects parameter 1 to be mysqli_result, bool given in /var/www/html/americanthinker/admin/common/functions/func.general.php on line 126
 Gaddafi dead? - American Thinker
« DC: What Recession? | Wash. Post legitimizes Hamas rule in Gaza -- no terrorists there »
|

Believe it when you see the body. The NTC has been notorious for claiming "victories" where none are to be had. [Update below: graphic picture allegedly of Gaddafi]

Having said that, here's the story as it is breaking so far:

His killing, which came swiftly after his capture near Sirte, is the most dramatic single development in the Arab Spring revolts that have unseated rulers in Egypt and Tunisia and threatened the grip on power of the leaders of Syria and Yemen.

"He (Gaddafi) was also hit in his head," National Transitional Council official Abdel Majid Mlegta told Reuters. "There was a lot of firing against his group and he died."

Mlegta told Reuters earlier that Gaddafi, who was in his late 60s, was captured and wounded in both legs at dawn on Thursday as he tried to flee in a convoy which NATO warplanes attacked. He said he had been taken away by an ambulance.

There was no independent confirmation of his remarks.

An anti-Gaddafi fighter said Gaddafi had been found hiding in a hole in the ground and had said "Don't shoot, don't shoot" to the men who grabbed him.

His capture followed within minutes of the fall of Sirte, a development that extinguished the last significant resistance by forces loyal to the deposed leader.

From this account, it almost sounds like a summary execcution. The killing came "swiftly after his capture" after the dictator had been wounded in both legs. No use speculating further, but if true, it would not be out of character for the NTC who is proving itself anything but a force for "democratic change."

We'll hold off on the obituary until we have confirmation.

The UK Guardian has a continuously updated series of reports on the alleged death. The streets of Triploli are echoing with the sounds of auto horns and guns being fired into the air (the charming Arab way of expressing happiness, never mind where the bullets land).

We can expect Obama supporters to claim vindication for his policy of "leading from behind," and invidious comparisons with the blood and treasure expended in taking out Saddam Hussein and the aftermath. Of course, the two situations are not comparable, as Libya was an active revolution, supported by NATO (90% of which is the US military), while Iraq was an invasion.

The future of Libya remains an open question. The Muslim Brotherhood has tentacles throughout the Middle East, and organizational power that should not be underestimated.

But a horrible tyrant is reported dead, the murderer of a Pan Am 747-worth of Americans and other innocents. This is not bad news.

For my part, as an editor, I will be happy if I never again have to deal with the multiple spellings of his name, each as valid as the other, that come in: Gaddafi, Gadaffi, Qadafi, Qaddafi, Qadaffi, and all the rest. 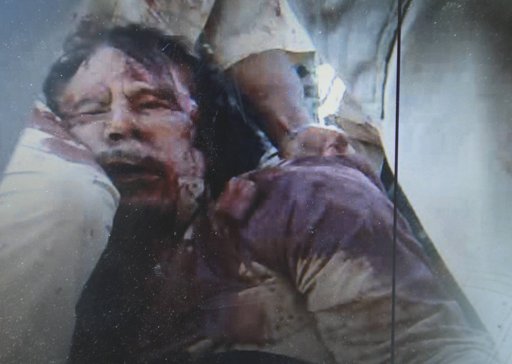 A blast from the past: 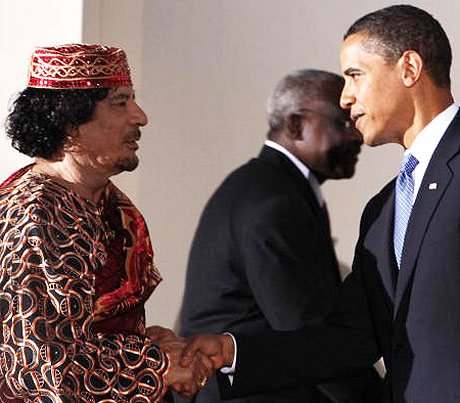 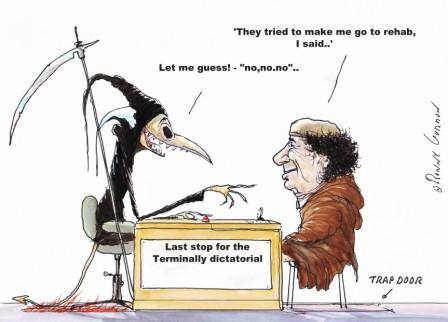