Ovide Lamontagne Is Running for Governor of New Hampshire

Ovide Lamontagne was already at the GOP Chili Fest and we got there early.  My wife Joan went right up to Ovide, grabbed his hand in both of hers, and said, "Tell me you are going to run."  He said he was.  Good!  He will have our support for Governor.

The GOP Chili Fest was held in Stratham, NH, on Saturday, 10 September.  I took the picture.  Isn't that a great smile?  He is such a nice man, charming, knowledgeable, and a true conservative.  When he spoke at Hampton Airport a few weeks ago, he gave a powerful speech in which he allowed as to how he might run for Governor.  The Manchester NH Union Leader ran a piece on 25 August indicating that Lamontagne might soon announce for Governor.  SeaCoastOnline's 11 September report headline was "Lamontagne mum on gubernatorial run at GOP Chili Fest." 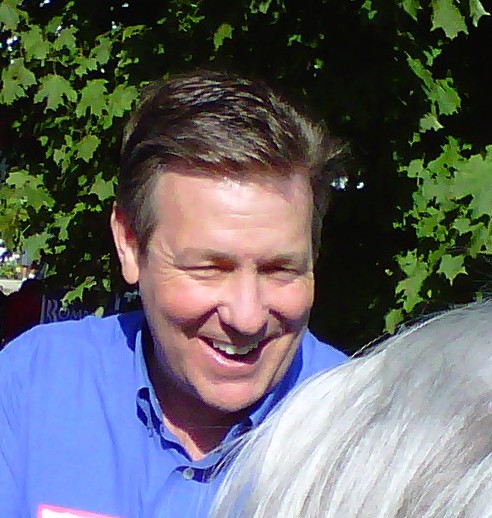 Mr. Lamontagne was very clear to Joan and me -- he is running.

New Hampshire Republicans should remember the spirited run Ovide had for the Senatorial nomination in 2010.  Despite a late start and a much smaller war chest, he came within about 1% of winning the nomination.  New Hampshire Republicans should also remember Ovide's gracious decision not to seek a recount and to stand with Kelly Ayotte.  The following is from Ovide's article in the American Thinker titled "The Conservative Challenger and the Establishment Victor."

In my decision to back Kelly Ayotte rather than seek a recount or wage an independent effort for office, my goal is to harness this raw energy and serve the greater good -- by delivering meaningful and needed conservative change to Washington.

Time has proven Mr. Lamontagne's judgment to be correct.

Kelly Ayotte gives all the indications of being a fine senator, a statesperson in the New Hampshire tradition.

Ovide has gained national stature in Republican and Conservative circles.  In April, Politico reported that Ovide Lamontagne had been named "Conservative of the Year" by Americans for Prosperity (AFP).  The New York Times ran a piece, also in April, that indicated the Lamontagne home was the place for presidential hopefuls to seek approval.  In June, The Hill declared Ovide one of the ten most coveted endorsements for presidential candidates.  Newsmax ran a similar article in September.

Ovide gave a brief but fiery speech to kick off the GOP Chili Festival.  He spoke of the need to defeat John Lynch after Lynch's eight years in office and complete the Republican resurgence in New Hampshire started in 2010.

"Eight is enough" he shouted!

Mike Johnson is a concerned citizen, a small government conservative, and a live-free-or-die resident of New Hampshire.  E-mail mnosnhoj@comcast.net