Warning: mysqli_free_result() expects parameter 1 to be mysqli_result, bool given in /var/www/html/americanthinker/admin/common/functions/func.general.php on line 126
 No, the Stimulus didn't work - American Thinker
« NASCAR drivers give thumbs down to presidential visit | Fast & Furious scandal may have its first cover-up »
|

No, the Stimulus didn't work

Jared Bernstein, former Executive Director of the White House Middle Class Working Families Task Force  tries to make a case that the stimulus worked.  Or, more precisely, he states that it did exactly what it was supposed to do, which by definition means it worked.  Mr. Bernstein needs to re-examine his own evidence.  Here's why his conclusions are wrong.

Right off we know it did not do what it was supposed to do.  According to the NY Times, Obama said the stimulus would create or save three million to four million jobs, nearly 90 percent of them in the private sector.  It didn't come close. 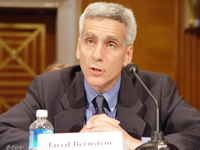 It was supposed to create enough jobs to bring the unemployment rate down below 8%.  That didn't happen.  And if we count the people who gave up (who might not have given up if the jobs picture been better) the number is even higher.

There.  That settles it, right?  Stimulus did not do what it was supposed to do.

But wait.  To be fair, let's be generous here and go with Bernstein's view that the stimulus was supposed to reduce unemployment and invigorate the economy, and maybe we just over-estimated the expected benefits, but it still worked.  Well, I guess anytime you give money to someone for doing something you are, by definition, creating a job.  And stimulating the economy?  As proof the stimulus worked, Bernstein provides documentation demonstrating that when money was being dispensed the economy improved, and when the spending stopped, the economy started to slide and the job creation stopped and retreated.  Okay, we'll go with his supporting documentation that shows it did just that.

But that's not what was supposed to happen.  All these working recipients were supposed to spend that money and create a whirlwind of economic activity that would burst the private sector wide open and get the great American jobs machine going again. The "stimulated" economy was supposed to keep on rollin' when the handouts stopped.  As Bernstein's provided documentation shows, that didn't happen either.

In short, the stimulus was supposed to jump-start the economy and therefore fix it.  It didn't.  It bailed water out of the boat for a while, but didn't plug the hole.

An excellent parallel of the stimulus story is the heralded "Cash for Clunkers" program.  According to Edmunds, only 125,000 of the 690,000 purchases would not have been made without the incentives, and with $3 billion spent, that works out to $24,000 per car.  Additionally, the price of used cars increased significantly due to the drop in supply, thereby impacting anyone (especially poor people) who needed to buy a used car.  Moreover, With reference to carbon dioxide emitted in the process of making a new car, William Chameides of Duke University said that in order to offset the carbon footprint of the new car from a clunker, the average driver would need to drive the car about five and a half years; with trucks, the figure jumps to eight or nine years of typical driving.  And to top this off, Harvard economics professor Edward Glaeser argues that subsidizing fuel-efficient vehicles encourages more driving, as the marginal cost per mile driven is less, which causes total fuel consumption to decrease less than expected.

Yet the Cash for clunkers program was considered successful, much in the same way Bernstein and the others behind the stimulus think it was successful.

So, if Bernstein and the other stimulus crafters believe the stimulus did what it was supposed to do, that means they intended to spend 800B taxpayer dollars to provide temporary jobs for 2,500,000 people at a cost of $320,000 per job.

Instead of stating that the stimulus worked, Bernstein should have provided excuses for its failure.  Had he insisted that the stimulus would have worked if it weren't for Obamacare, Dodd-Frank, job-killing green energy policies, etc., some people might have believed him.  Not me, but what do I know?  After all, my knowledge of these things is limited to what's obvious.