The azan is the muezzin's call to prayer. It consists of a number of sentences repeated several times: "Allahu Akbar," the Shahada (la ilaha illa Allah wa-Muhammad rasoul Allah - "There is no God but Allah and Muhammad is His Messenger") and the phrase "Gather for prayer." It is noteworthy that, in the period of Muslim conquests in the first centuries of Islam, this call was made from newly conquered sites.

As a striking example of this phenomenon, according to the pious Muslim narrative, after the Muslim forces had conquered Mecca, in January, 630 -- one of the most hallowed occurrences in Islam's history -- Bilal, Muhammad's Ethiopian muezzin, ascended to the top of the Kaaba (a cuboidal building in Mecca, Saudi Arabia, considered the most sacred site in Islam) to call the Muslims to prayer -- the first time the azan was heard within Islam's holiest city. This purported event was depicted in the Persian miniature, below: 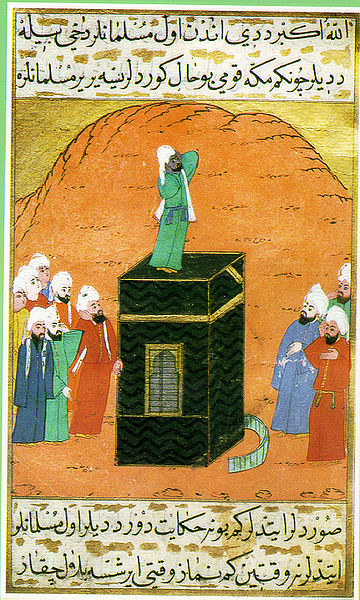 The recent solemn tenth anniversary of the acts of jihad terrorism on 9/11/2001, juxtaposed to such triumphal Islamic imagery, should remind us forever of Rauf's conquering mentality, notwithstanding his false, if treacly and oft-repeated claims of "ecumenism"