Warning: mysqli_free_result() expects parameter 1 to be mysqli_result, bool given in /var/www/html/americanthinker/admin/common/functions/func.general.php on line 126
 Epic Fail Straight Ahead: Socialism - American Thinker
« PBS alters transcript to hide Obama gaffe | Have We Forgotten About Sundays? »
|

If there were ever an example of socialism writ large, it is Greece.  Now look where it has led the continent.  Just look at the 1 year Greek Government Bond yield, now reaching a clown car 96%.  When it hits 100, then what?

At first, we can look at the issue tactically: 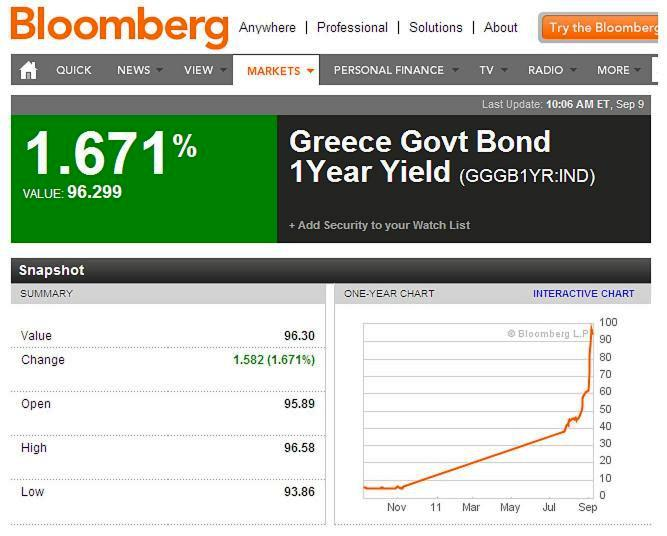 News out of Greece is that the government there had a failed auction and for now has money to operate, but not for too much longer. According to Capital.gr:

Greece is now facing the critical possibility of shortage of funds to meet the basic needs of the state, causing intense fear within the government, which prepares scenarios of gradual suspension/postponement of payments in order to ensure sufficient funds for salaries and pensions.

In another article, we learn:

Jürgen Stark, Member of the Executive Board and Governing Council of the European Central Bank informed President Jean-Claude Trichet on Friday that, for personal reasons, he will resign from his position prior to the end of his term of office on 31 May 2014.

Stark had strong conflicts with the bond buying programs instituted by the ECB. He was more of a fiscal hawk, apparently. So it looks like someone has reached the limit of endurance and recognizes the reality the continent is facing.  His replacement is unnamed at this point

Meanwhile, the euro is getting pounded on -- down in practically all areas.  The European apparatchik are denying rumors of an impending Greek default, but then again, looking at the numbers, the yields, the failed auctions, people quitting, debt piling up, and a sovereign nation losing ability to keep the lights on past another 30 days, perhaps there is a good reason to suspect the inevitable.   Some European bank is at serious risk of caving in from this, there are likely a few of our own who also have significant exposure, from having so much money tied up in toxic and leaking Greek government bonds.

A default would blow a few Euro-banks sky high and would impact us here as well.

News is now coming out that Germany is saying that they are planning to bail out their own banks if Greece defaults.  Overall, this does not look like a move of confidence across the Atlantic.  Perhaps the Germans know that the end is near and a default is imminent.

Hence expect rather desperate moves by Brussels to prevent this from happening, but at some point the negative buoyancy becomes too great and the ship still sinks.  So for now, the best guess is that the Europeans abandon any sort of fiscal and monetary sanity and starting printing money in a really big way.  In fact, for reasons of its own but partially related to the euro meltdown -- the Swiss are intentionally devaluing their own currency.

The other, and more important strategic issue, is not being discussed by the media:  the failure of socialism.

Socialism is an artificial construct that denies the overwhelming forces of the laws of economics and basic mathematics.  This is, to quote Thatcher, what happens when you run out of other people's money.  It always fails, and usually to the astonishment of its architects and sympathizers.  A distorted and unworkable system of government led to this situation.  That is the trademark of socialism, but will its adherents bother to listen to the lesson being screamed at them from outside of their own echo-chamber?