Warning: mysqli_free_result() expects parameter 1 to be mysqli_result, bool given in /var/www/html/americanthinker/admin/common/functions/func.general.php on line 126
 Graph for the Day for August 6, 2011 - American Thinker
« Yes we can! (lose our AAA credit) | Racial mob violence rocks the Wisconsin State Fair »
|

"I think we are past the crisis point in the economy, but we now have to pivot and focus on jobs and growth." President Obama, December 2010.

"I want to announce that the leaders of both parties in both chambers have reached an agreement that will reduce the deficit and will avoid default. It will allow us to turn to the very important business of doing everything we can to create jobs."  President Obama, July 31, 2011. 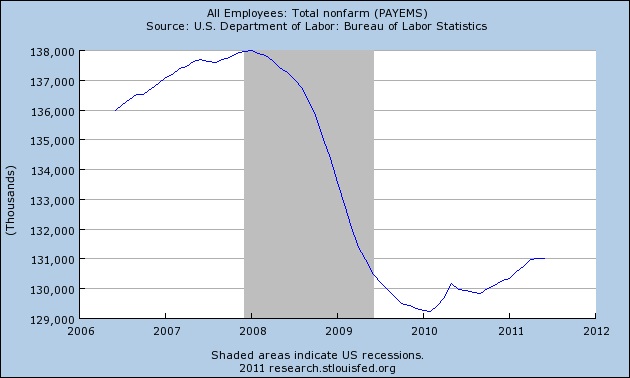 Sources:  Geoff via AoSHQ, and the St. Louis Fed/FRED.