Warning: mysqli_free_result() expects parameter 1 to be mysqli_result, bool given in /var/www/html/americanthinker/admin/common/functions/func.general.php on line 126
 Taxpayer-funded exhibit slurs GOP govs as Nazis - American Thinker
« What do the states know about budgeting that Obama doesn't? | Polls all over the map on debt ceiling debate »
|

"Artist" Sean Michael Stimac has released his piece, "The Faces of Fascism," for display at the Marquette (Michigan) Arts and Cultural Center.  In it, Republican governors Walker, Kasich, Scott, and Snyder appear on a Nazi-style propaganda poster with the visage of the Third Reich's eagle, and in its talons is not the swastika, but the Republican Party's token elephant.

First of all, I'd expect a bit more profundity or possibly a bit of abstraction from "art" that has been exhibited as high-brow stuff at a popular cultural center.   Instead, this piece has all the value of an unoriginal political cartoon, giving us the same baseless, in-your-face nonsense we've always gotten from the dimwitted left- you know, Bush is a Nazi, ScottWalker's a Nazi, Tea Partiers are Nazis, blah, blah, blah.  But what really stands out here is the sheer stupidity and ineffectiveness of this particular effort.  Take a look: 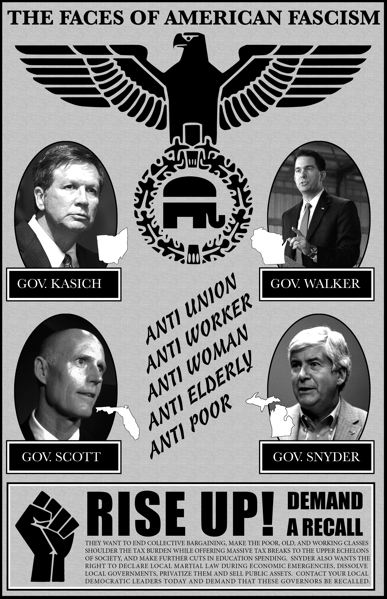