Similarly, for the August 11 Minnesota primary, Pelosi endorsed another of Congress' three Israel-boycotters, Rep. Ilhan Omar, who has been enthusiastically praised by David Duke, and was voted 2019 Antisemite of the Year in a poll by stopantisemitism.org.

What is Pelosi's motivation in supporting them?  Is it identity politics?  In Omar's race, Pelosi had the option of endorsing her progressive African-American opponent, who opposes the Boycott-Divest-Sanction (BDS) campaign to isolate and destroy Israel.  In Tlaib's race, where opponent Brenda Jones is a staunch ally of Rev. Louis Farrakhan, Pelosi had the option of staying neutral.

Even Brenda Jones said she's had enough of Tlaib's flamboyant divisiveness and emphasized the need for working with President Trump and the Republicans.  “I am interested in opening a dialogue with people that I do not always agree with for the good of the district,” Jones said.  She has criticized Tlaib for vowing, within hours of taking office, to “impeach the m-----f-----.”

Perhaps Pelosi, who seems increasingly consumed with hatred of Trump to the point of fulfilling Tlaib's vow of impeaching him for no good reason, prefers the Squad over conciliatory Democrats because she has reached the point where she shares their militancy.  Whatever Trump does, she predictably does the opposite.

But by endorsing Tlaib and Omar, the nation's most powerful Democrat is giving the party's seal of approval to their boycott of Israel and their support for its openly genocidal terrorist enemies -- a historic step towards turning the Democrats into a twin of the recently defeated terrorist-allied Corbynite Labor Party.

Tlaib, like Rep. Alexandria Ocasio-Cortez, is a member of the Democratic Socialists of America (DSA), an anti-Semitic hate group that promotes “Palestine from the River to the Sea” -- a euphemism for replacing the world's one tiny Jewish state with another Islamic state, of which there are already dozens.  The DSA promotes the BDS campaign, and was quick to blame the Jews for Minneapolis police violence towards African-Americans.

Tlaib, Omar, and Ocasio-Cortez’s BDS advocacy places them in intersectional solidarity with David Duke and neo-Nazi parties in Germany.  German officials recently declared that this economic warfare against the Jewish state “roughly recalls similar measures against German Jews by the National Socialists” in 1933.  The hate-monitor organization Canary Mission has noted the identical bigoted talking points voiced by neo-Nazis and the progressive-Islamist alliance that Pelosi is helping to take over the Democratic Party.

Tlaib sent a chilling message at her swearing-in ceremony, where she was joined by Abbas Hamideh, an outspoken admirer of genocidal Hezb’allah leader Hassan Nasrallah and Palestinian-terrorist child-killer Samir Kuntar.  Of the countless Palestinian murders of Jews over the decades, Kuntar's are remembered as among the most horrific.  As the Algemeiner reported: 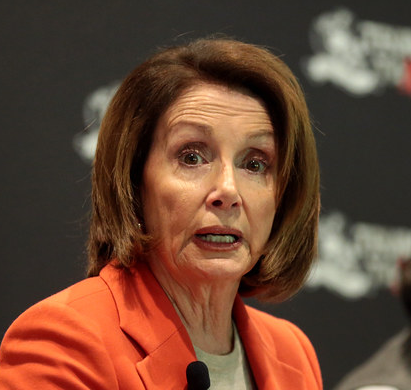 Hamideh, executive director of the US-based Palestine Right to Return Coalition, has equated Zionists to Nazis, said Israel has a “delusional ISIS-like ideology” and labeled the nation’s founding a “crime.”

According to a screenshot captured by advocacy group StandWithUs, he also lamented the death of “the legendary Hezbollah martyr” Samir Kuntar in 2015, who years earlier led an attack that killed four Israelis.  Among the fatalities was 31-year-old father Danny Haran, who Kuntar shot to death in front of his four-year-old daughter Einat, before killing the girl by smashing her skull against a rock with his rifle.  Haran’s wife managed to hide with her two-year-old daughter Yael, but accidentally suffocated the child while trying to quiet her whimpering...

Unfortunately, there's more.  Steven Emerson of the Investigative Project on Terrorism reported in 2019 that “...Tlaib posed with Nader Jalajel, a Palestinian activist who last year mourned the death of a terrorist who led a shooting attack that murdered a rabbi...”

And according to the Zionist Organization of America, Tlaib posted a photo  of herself with Rasmea Odeh, a Palestinian terrorist convicted of the murder of Hebrew University students Edward Joffe and Leon Kanner in a 1969 bombing.

Last year, Tlaib and Omar's planned trip to Israel (identified as “Palestine” on the itinerary) was sponsored by a a terrorism-promoting organization that disseminates bizarre, vicious, anti-Semitic libels. Clifford D. May wrote:

They were planning to meet with individuals and groups directly tied to terrorism and anti-Semitism.  Among them: Shawan Jabarin, identified by Israel’s Supreme Court as a senior member of the Popular Front for the Liberation of Palestine, a Marxist-Leninist organization responsible for airplane hijackings and suicide-bombings...

Organizing their visit was Miftah, an organization that in 2013 published an article alleging that Jews use Christian blood for their Passover matzos -- a very old and very sick libel.

Miftah also published “an American neo-Nazi treatise” called “Who Rules America: The Alien Grip on Our News and Entertainment Media Must Be Broken.”  Apparently, to Tlaib and Omar, white supremacy in defense of Jew-hatred is no vice.

Miftah has praised the murder of Jews including Gail Rubin, niece of the late Sen. Abraham Ribicoff.  The organization also accused Israel of harvesting organs from Ukrainian children and Haitian earthquake victims.

If Tlaib's trip sponsor sounds like a medieval European lynch mob that came to us through a time portal, unfortunately their kind of ignorance, superstition, and obsessive hatred increasingly has a voice in universities and in media -- and in Congress. Consider who Pelosi chose to deliver the opening prayer for a session of the U.S. House last year -- Imam Omar Suleiman, who has equated Israel with Nazi Germany, called for Jews to be massacred in a third intifada, and blamed Jews for the fact that food decays.

Perhaps inviting him was carelessness on Pelosi's part, but in retrospect, it looks like another example of “do the opposite of what Trump would do” and a warning sign that more capitulation to her party's far-left bigot wing was in store.

She knelt with Sen. Charles Schumer in memory of George Floyd, but when the innocent victims are another historically oppressed minority whom the progressive-Islamist mob regards as deserving of slaughter, she stands with Tlaib and her fellow terror enthusiasts on the side of the murderers.

The cultural divide between western civilization and those indoctrinated into a genocidal jihadist mindset will probably not be bridged during our lifetimes. But what Pelosi has done is to legitimize and empower the toxic culture Tlaib brings with her; to side with it, and to assist it in hijacking the Democratic Party.